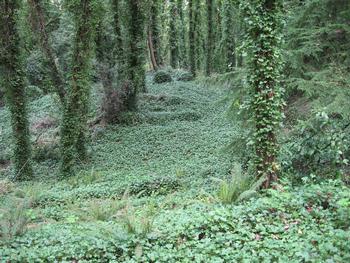 Unlike some other nasty plants that we’ll profile on City Green, invasive ivy is not a newcomer to town.  It’s well established in our neighborhoods and natural areas – but it faces an impressive army of Portlanders who want to see it gone!

Join that army this Saturday, Oct. 5 for the 10th annual No Ivy Day.

Since 1994, volunteers with the No Ivy League have saved tens of thousands of trees from the strangle of ivy, and have cleared over 4.5 million square feet of ivy from our forest floors with their bare (well, gloved) hands.  More than 25,000 people have logged time fighting this invader.  Are you up for it?

Why is ivy bad? English ivy and Irish ivy (Hedera helix and Hedera hibernica) were once widely used in landscaping. It spreads easily, though, and birds carry its berries to new areas.  In Portland, it has taken over along roadways and spread into parks and natural areas, like Forest Park and the River View Natural Area.  There, these ivies essentially suffocate the native plants and trees that make up different levels of the forest.  This can lead to unstable hillsides, erosion that pollutes streams, and high fire risk from the “ladders” of ivy vines that climb up the trees.  Ivy and other invasive species don’t soak up the rain as well as native plants do, so there is more stormwater runoff eventually getting to the Willamette River.

Learn more about ivy from the No Ivy League: www.portlandoregon.gov/parks/noivy

Why do we care about invasive species? They can cause a lot of damage to our forests, streams and rivers, and property. Ultimately, they can lead to extinction of native plant and animal species.  Nationwide, damages associated with invasive species cost approximately $120 billion each year. In Oregon, the control of invasive weeds and the cost of the damages they create amounts to about $125 million each year. We know that it costs a lot less to control new invasive plants before they become infestations. This takes help from everyone. Read more here about the problems caused by invasive species and why Environmental Services is particularly concerned about their impact on water quality.