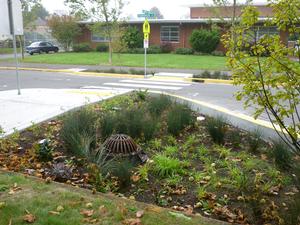 This week, Chicago’s mayor announced a $50 million investment over five years in green infrastructure to upgrade that city’s water and sewer infrastructure.  This sounded to us a lot like Portland’s Grey to Green initiative which launched in 2008.  We’ll take that as a compliment!

Portland’s efforts to use green streets (bioswales), ecoroofs, trees, and natural area protection to reduce stormwater impacts and protect water quality are a model to other communities who are starting to tackle similar challenges.  See Seattle’s announcement from earlier this year.

In Chicago, pollution from stormwater flows into the Chicago River and Lake Michigan.  Storms also cause sewage to back up in people’s basements in some areas, similar to problems in older neighborhoods here in Portland.  So, while it’s a dubious honor to share these problems with other cities, it’s also a reminder that we’re in good company as cities across the country recognize the important role of nature in the city.  Tom Powers, commissioner of Chicago’s Department of Water Management states:

“In many cases green infrastructure has proven to be cost effective over traditional hard infrastructure, allowing the City to stretch our capital improvement dollars.  Additionally, green infrastructure often has other non-stormwater related benefits, like serving as open space, creating wildlife habitat and improving property values.”

Chicago will be building on their impressive utilization of ecoroofs for stormwater management and climate change adaptation, and efforts like their Sustainable Backyards Program, which provides incentives for tree planting, naturescaping and other watershed-friendly practices.

In Portland, Environmental Services and our community partners continue to use green infrastructure, along with sewer pipe improvements, to address our aging sewer system.  Green infrastructure keeps stormwater out of the sewer system and local streams, filters pollutants, and provides many other benefits to neighborhoods.  Check out the progress we’ve made since 2008, and follow the news about current projects on City Green. We look forward to more sharing and learning from Chicago, Seattle and other cities.