We're pleased to announce that the City of Portland and Multnomah County’s new draft Climate Change Preparation Strategy is open for comment. Technical experts, organizations, businesses and members of the public are encouraged to provide feedback on the documents.

The draft materials describe how climate change will affect the region and what actions are proposed to improve resiliency and to protect communities.

How are we going to deal with hotter, drier summers, and warmer, wetter winters? 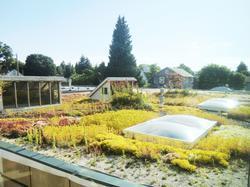 Strategies include reducing climate impacts on vulnerable populations, and using more green infrastructure, such as ecoroofs, green streets, and trees to reduce the urban heat island effect.  One tool could be adopting development performance standards similar to Seattle's Green Factor.  Other strategies center around further protecting and restoring our natural systems, like streams, forests and floodplains.

Many of these strategies are already being implemented in Portland to manage stormwater, improve water quality, and store carbon, but in the face of climate change, we may need to do more.

Visit: www.portlandoregon.gov/bps/ccps for more information about the strategy and how to comment. Comments are due by April 11, 2014.