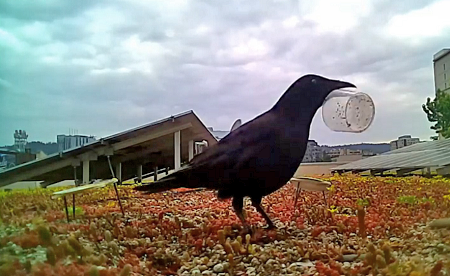 What does biodiversity on Portland ecoroofs look like and how does it compare with other cities?

That’s what a partnership between the Zurich University of Applied Sciences and Portland State University hopes to find out. Using beetles as a bioindicator and using pitfall traps to collect beetles, nine Portland ecoroofs as well as ground sites are being sampled throughout this summer. The catch will be identified and compared with the results of similar studies taking place in San Francisco, Mexico City and Basel, Switzerland.

Ground-dwelling insects fall into the vinegar-filled cups placed flush into the soil, and the cups are lightly covered to prevent the sun and rain from weathering the contents. However, on multiple ecoroofs the cups have been repeatedly pulled out and tossed around. A security camera was set out and the vandals were filmed red-handed – crows!

We know ecoroofs do a great job of managing stormwater. Research specific to our region on the simultaneous benefits that ecoroofs provide, such as the urban habitat they provide or energy savings, is something we love to see more of. We’ll keep you posted of their results, particularly after some form of crow-baffle is installed.