This weekend, the Portland Timbers kick off their 2015 regular season at Providence Park. Many people don’t know that the park is located over what was once one of the west side’s largest waterways, Tanner Creek. The creek got its name from tanneries built next to it and was one of several streams that flowed down from the West Hills and emptied into Couch Lake (shown in the map below) on the banks of the Willamette River. 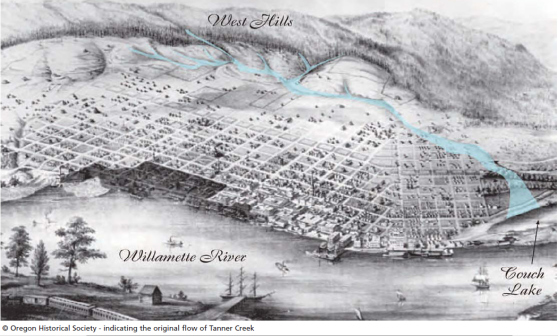 As Portland’s west side grew, the city eventually routed Tanner Creek and other West Hills streams into underground combined sewer pipes and filled in the stream channels. In 1926, the Multnomah Athletic Club built Multnomah Stadium directly over the pipes that carried the streams, stormwater runoff and sanitary sewage to the Willamette River. Portland didn’t build a wastewater treatment plant until 1952. Today, we call the stadium Providence Park.

“Only a limited number of people actually know for sure what Tanner Creek is anymore. Some say they can hear it rush freely under a manhole near the Providence Park light rail station, others think it’s a sewer. Some say the water is only deep enough to cover your bootlaces, but others still walk around Portland today with t-shirts telling the world they kayak’d Tanner Creek, remnants from a DIY approach to cheap thrills in the 1970’s.”

Even though it’s still underground, you can find several reminders of Tanner Creek up here on the surface. The city built Tanner Springs Park where the creek used to flow into Couch Lake. A few blocks away from Providence Park, placards in the sidewalk mark the path of Tanner Creek’s historic channel. 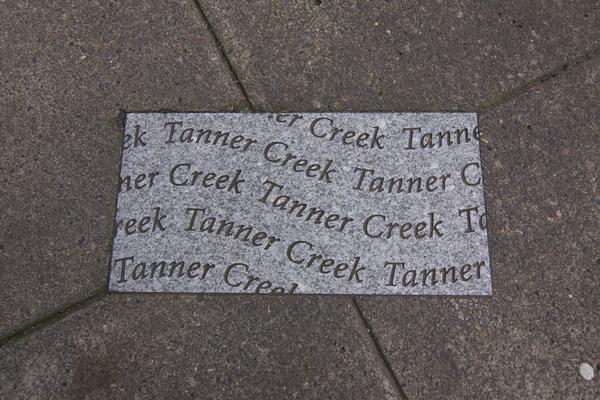 “(Providence Park) holds its own mementos of the creek. A plaque set right inside Gate Four, describes where Tanner Creek ran when the field was a baseball stadium and home to the Portland Beavers. The log slab artwork outside the Adidas Timbers Team Store uses elements of the story of Tanner Creek to commemorate the history of the stadium. Most subtly, however, the wooden seats in section 118 dip slightly in the middle as a result of the previously sinking foundations and a reminder of the gulch below.” 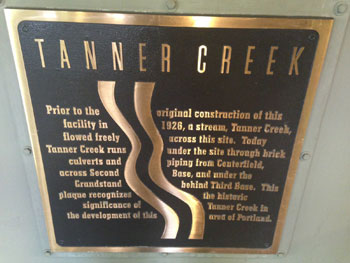 (photo courtesy of the Portland Timbers)

So, Timbers fans, when you go to Providence Park on Saturday to see your team take on Real Salt Lake, watch for these reminders of Tanner Creek. And when you raise the City of Portland flag in the stands, remember that the flag’s blue color represents "Our Rivers" and Tanner Creek. 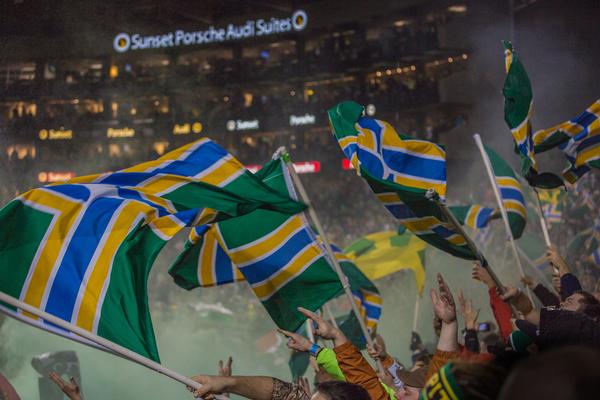