At first glance, Japanese butterbur (Petasites japonica) appears to be a tropical beauty and a fantastic groundcover for your back yard. But beauty can be deceiving! Its huge leaves shade out other plants. It steals nutrients and can quickly invade an entire area. It’s not yet widespread in Portland, but it is growing in some sensitive natural areas and it’s hard to get rid of. Japanese butterbur is listed as a “watch” species in Portland, but may be reclassified with a higher “B” ranking.

As its name suggests, Japanese butterbur hails from Japan where some people consider it edible with careful preparation. Some parts of the plant are poisonous. Its scientific name comes from the Greek word petasos, meaning a wide brimmed hat.

Japanese butterbur’s kidney-shaped leaves can be up to four feet wide and are fuzzy on the underside. It emerges in late winter or early spring, sometimes with clumps of white or pale yellow flowers appearing before the leaves, and can grow up to six feet tall. 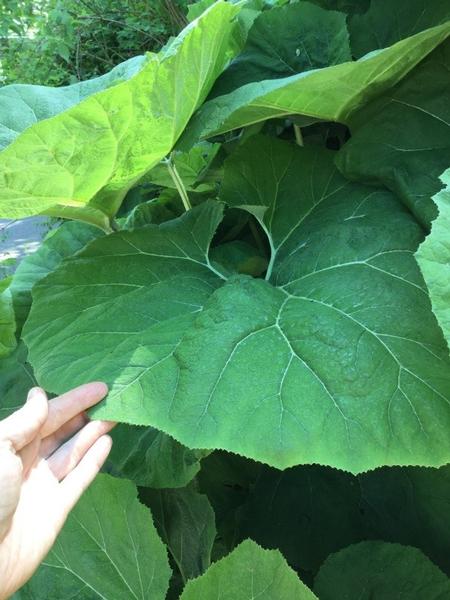 Japanese butterbur spreads mostly through underground stems, and sometimes through seeds. It seems to be spreading in Portland through yard waste dumping, plant trading and when the underground stems break apart and float down streams. Gardeners sometimes plant Japanese butterbur in containers to check its spread, but this plant is an escape artist! It’s been known to spread in spite of containment. 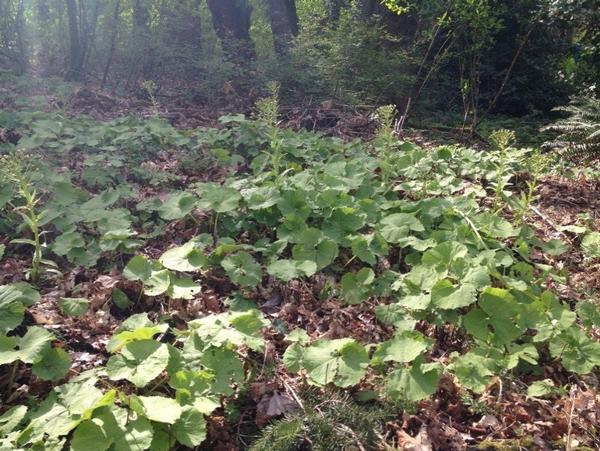 Hand-pulling is an effective way to remove small areas of Japanese butterbur from your yard, though you’ll have to continue pulling sprouts for at least a few years. Mowing will not remove the plant but can keep it from spreading. More established populations are difficult to control and common herbicide treatments don’t seem to be effective. If you find Japanese butterbur, please contact Dominic Maze at Environmental Services to discuss control options.

Invasive species affect us all. They damage forests, streams, rivers and our property. Nationwide, invasives cause an estimated $120 billion in damages every year. In Oregon, the costs of controlling invasive weeds and the damage they cause amounts to about $125 million each year. It costs a lot less to control new invasive plants before they become infestations, but we need your help. Read more about the problems caused by invasive species and why Environmental Services is concerned about their impact on water quality.

Where has this been spotted around the city? Is this found around Germantown hills?

have this plant growing im my garden,thats in the uk,in wimblington,in cambridgeshire,have been digging it up as i thought it was a weed,it does seem to be very invasive,and difficult to get rid of,j cornelious

I've got this growing quite ferociously over here in Ontario Canada. Started pulling and digging it up with a vengence. Hoping this year makes a big dent in the population. Likely an ongoing battle for the best couple years, as mentioned above.

Its amazing how much I've grown to despise this plant.

We have this in a wet area garden, it was there when we moved here (British Columbia) 3 years ago. It is very invasive and seems almost impossible to remove from the garden and now the lawn. It does grow large and consumes moisture, light and space. I would never plant this species intentionally, and hope to be able to remove it with chemicals if possible. Spread into the nearby waterfront is more concerning to me than the conservative use of Roundup at this point.

Did the use of Roundup (paraquat) work to eradicate this plant? What is the best systemic herbicide for this plant?

We moved into a home in Colorado located at 7200 feet above sea level. This plant was growing in our beds successfully - primarily shade. It has never jumped the border the borders and I wish I could find more to backfill into scarce areas. I ordered seeds, and received them at the time the warnings were going out about seed distributions of invasive species. I started some indoors to see what I would get and it was clearly NOT butterbur so the seeds will be burned. Anyway, I have tried harvesting seeds from the few flowers it produced this year so we’ll see.

Butterbur has been a lifesaver for me since my nueroligist recommended it for migraines as I can't take most pharmaceuticals. Like most plants we consider "weeds" it is very medicinal. Nature tries to give us what we need. The remedy will grow right under our nose sometimes but most of us don't know about it.

When I lived in Portland, I found fuki / butterbur to make an excellent perennial vegetable and groundcover. If you have more of it growing in your yard that you want, your first approach should be eating it! I wrote up a detailed report of my experience with it here: https://farmerscrub.blogspot.com/2011/05/crop-summary-fuki-petasites-japonicus.html