This world traveler comes from the Mediterranean region, but is also found in places like Australia, South Africa, Chile, Pakistan, and Canada, to name a few. Milk thistle is a B listed species in Oregon and is widespread in southwestern part Oregon and the Willamette Valley.

There are several reasons to be concerned about milk thistle. One is that a single plant can produce about 6,000 seeds that can stay viable for nine years! Seeds can spread in many ways including wind, water, mud, vehicles, animals, machinery, agricultural produce, and in flower or vegetable seed packets. Milk thistle will overstay its welcome anywhere it can find fertile soils that are often disturbed. Like many other invasive species, milk thistle will form dense patches that outcompete native plants for moisture, sunlight, and nutrients. One of the worst things about milk thistle invasion is that it accumulates nitrates and can poison cattle and sheep. We don’t want this plant to spread!

While many thistles look alike, the distinctive green and white marbling of the leaves gives away milk thistle’s true identity. The leaves also have spiny margins, are lobed, hairless, and quite large, with leaves at the base reaching 20 inches long. It is an annual or biennial and grows between two and six feet high. Between April and July, a solitary large purple flower emerges at the end of each stem. The flower is typically about two inches across, (though four-inch flowers are possible) and is surrounded by one to two-inch spines. Ouch! 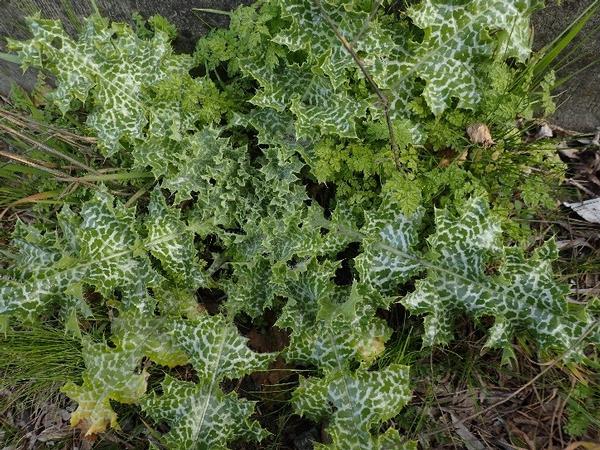 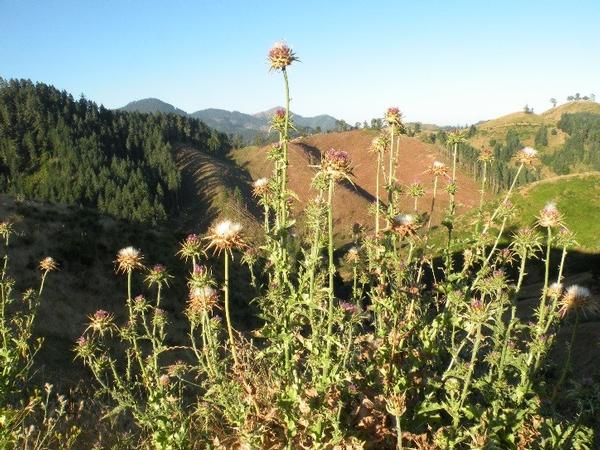 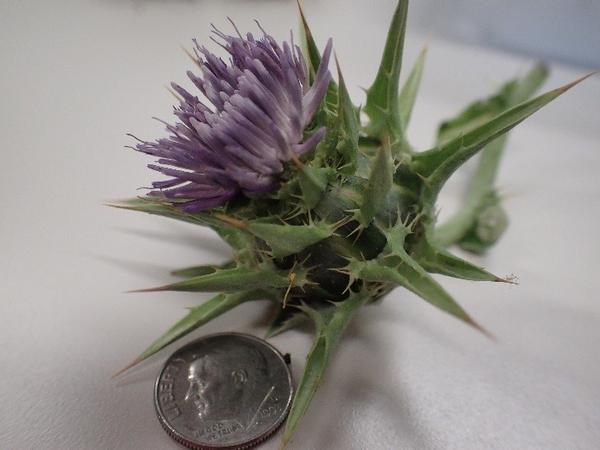 Since milk thistle seedlings require light, the best way to send a “not welcome” message is to plant competing vegetation. It’s also important to remove sources of soil disturbance. If you have a small patch, hand pulling can be effective (watch out for those spines), but you should follow up with planting a native replacement, such as a native perennial grass. Low amounts of herbicide can help control milk thistle as well. Your best chances for successful control are when the plant is still a seedling, or as it grows into a rosette. If you find milk thistle, please contact Mitch Bixby at Environmental Services to discuss options.

Invasive species affect us all. They damage forests, streams, rivers and our property. Nationwide, invasives cause an estimated $120 billion in damages every year. In Oregon, the costs of controlling invasive weeds and the damage they cause amounts to about $125 million each year. It costs a lot less to control new invasive plantsbefore they become infestations, but we need your help. Read more about the problems caused by invasive species and why Environmental Services is concerned about their impact on water quality.