Today, Meyer Memorial Trust’s Willamette River Initiative released a report card for the Willamette River, from its headwaters near Eugene to the confluence with the Columbia River. 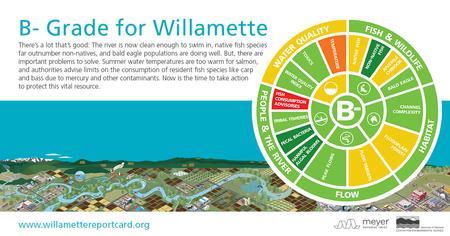 There’s some cause to celebrate -- the entire river gets a B- grade.  Oregonians can be proud of the fact that the river is much cleaner than it used to be.  But, there’s still a lot of work to be done.  Each of the river’s three reaches (Upper, Middle and Lower) has unique characteristics and concerns, and receives its own grade for things like water quality, flow and habitat.  Learn more at www.willamettereportcard.org. 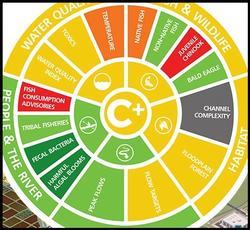 Here in Portland, we are part of the Lower Willamette, which scores a C+.  The Lower Willamette starts in Newberg, flowing through a few miles of farmland and small cities before it reaches the Portland metro area and becomes the river we know.  Here the river flows through urban development, industrial areas and marine port facilities before it reaches the Columbia.

All this development takes a toll.  Poor water quality, very poor juvenile Chinook populations, and low native fish diversity are what give our reach of the river a C+ in this new report card.  But there is good news, too, and there are many things we can do in Portland for a healthier river.

Some of the issues highlighted in the report card are: 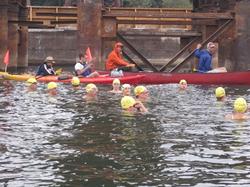 The Willamette earned ‘As’ for low levels of fecal bacteria and harmful algal blooms, which means it is clean enough to swim in along its entire length. Portland has contributed to these good scores in the Lower Reach by improving stormwater management and building new infrastructure to reduce combined sewer overflows into the river by about 94%.

There is still more work to be done to manage stormwater runoff from our neighborhoods to improve other water quality issues, though.  The Willamette is too warm for healthy salmon and steelhead populations and received a D- overall for water temperatures. 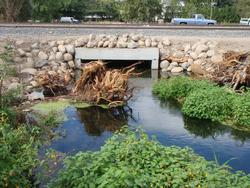 Portland is working to support native fish like salmon and steelhead by removing culverts that block native fish in our streams and improving water quality in tributary streams like Johnson Creek and Tryon Creek. 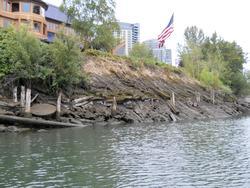 Much of the forest that once lined the river in Portland and upstream has been lost, along with complex and branching side channels that provided important fish and wildlife habitat and helped keep water clean and cold.

Increasing our urban forest by planting street and yard trees is one thing Portlanders can do to help, and habitat enhancement projects at Oaks Bottom and Stephens Creek Confluence are examples of how we can improve habitat along our part of the river. 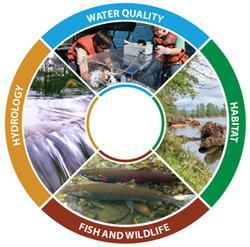 Portland’s Willamette report card focuses just on the river’s watershed that is within the city, and includes information about tree canopy, the condition of the river’s banks, and impervious area (like pavement) in neighborhoods that drain to the river.  These are issues where Portland has the ability to make some improvements.

The Willamette River Initiative’s new report card focuses on the entire main stem of the Willamette River.  It includes information that is not in Portland’s report card, like river flows, tribal fisheries, and toxic chemicals such as pesticides and metals in the water.

Learn more about the Willamette River and how you can help raise the grade at www.willamettereportcard.org.