People familiar with Johnson Creek weren’t surprised when the creek jumped its banks in southeast Portland in early December. But with a record rainfall, many were wondering, just how big was the flood? 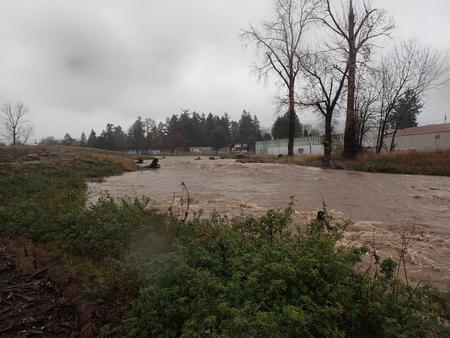 While we won’t have an official answer until flood data has been analyzed, here's what we do know:

Rainfall amounts on December 7th were extraordinary. In some parts of Portland, over 2 inches of rain fell in six hours. It was a 25-year storm, which means there’s a 4% chance of that size of rainstorm occurring in any given year. Almost 16 inches of rain fell at Kelly School in the Lents neighborhood between December 1st and December 20th!

On the afternoon of December 7th, Johnson Creek crested at an all-time record high of 15.33 feet. Creek levels usually range from four to eight feet in the winter. At 11 feet, the creek starts to top its banks in places. The highest previous crest was 15.30 feet in November 1996, also during a 25-year storm. While this month’s flood was slightly higher, the flood in November 1996 lasted longer and spilled more water.

So how could intense rainfall and record high creek levels not result in a 100-year flood?

Johnson Creek rises and falls quickly based on rainfall. That said, not all of the rain reaches the creek. Some soaks into the ground. Trees and plants soak up some, and some collects in ponds, puddles, and gutters. And while the storm lasted for several days, the heaviest rainfall was concentrated in a relatively short amount of time. This caused the creek to rise to flood stage then drop down again quickly.

Documentation of Johnson Creek floods dates back to the mid-1930s. Historically, the most damaging floods along the creek have happened when rain falls on snow on the ground, like the Christmas flood of 1964. The 2009 storm was also a rain-on-snow event, but it did not cause the same amount of damage as in 1964. Johnson Creek hasn’t had a 100-year (or 1% chance) flood during the time records are available. 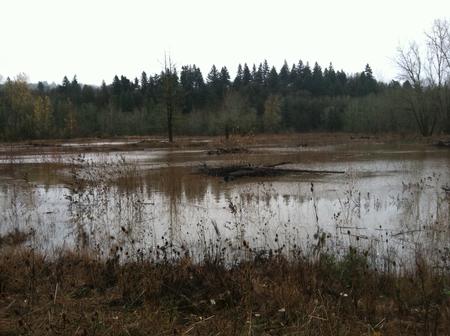 While the December 7th flood was a historic high for the creek itself, the flood covered less area along Foster Road and in the Lents and Powellhurst Gilbert neighborhoods than during large storms in the past. This is partly due to green infrastructure: the Foster Floodplain, Schweitzer, Luther Road and Tideman Johnson floodplain restoration projects added more storage area for floodwaters along the creek and reduced localized flooding. 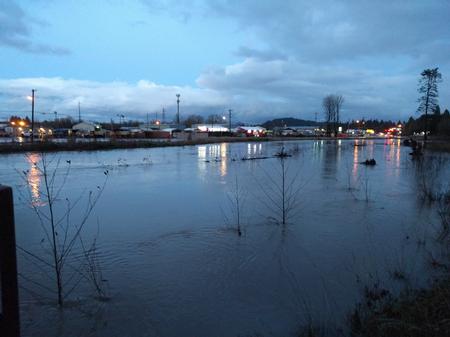 During and after the December 7th flood, staff from Environmental Services and other agencies were on the ground mapping areas that flooded and measuring flood depths. The data they collected will be used to design future floodplain restoration projects along Johnson Creek.

I have noticed that over time in the last few years a lot of silt accumulated in the Brookside restoration lake. It actually has an island or a peninsula depending on water level. Wondering if because of this silting the lake holds less water, would this contributed to the over flow to Foster Road?

Hi Andrew, thanks for the good question. Here is some information from the Johnson Creek team:
Brookside Wetland was designed to provide 35-acre feet of flood storage (enough to cover 35 acres with one foot of water). During the winter, the wetland (the pond or lake area) usually has enough water to cover the sediment so it does not provide much flood storage. By design, most of the flood storage is in the floodplain surrounding the wetland, which is above ordinary high water.

Johnson Creek has been dropping sediment along that bend for many years as part of a natural process. Fast moving water in the creek slows as it enters the wetland. As a result, sediment settles out and is forming a bar that disconnects Johnson Creek from the wetland in the summer. This actually helps protect salmon in Johnson Creek. In the summer, slow-moving and open waters, like those in the wetland, heat up. When warmer waters are directly connected to Johnson Creek, they increase stream temperatures, which is already a problem in Johnson Creek.

You may have notice vegetation being planted on the sediment bar. This is to help reduce temperatures by shading Johnson Creek and the wetland. So far the vegetation hasn't been very successful because there isn't enough organic matter in the soil. We are hopeful that over time, the vegetation will grow and help sensitive species, like Northwestern red-legged frogs and long-toed salamanders.