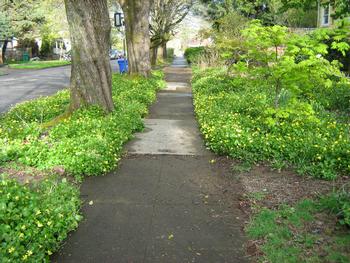 An important part of managing the city's public natural areas, parks and rights-of-way is managing the spread of invasive plant species.  Invasive species damage our forests, water and other public resources.

Some invasive plants, such as lesser celandine, reduce the ability of our land to absorb stormwater, causing erosion and other problems that harm streams and rivers.  Other invasive plants, like ivy, can climb and smother native trees and shrubs, destroying the forest canopy and causing fire and landslide risks.

The City of Portland's Invasive Species Program is now in its eighth year of coordinated plant management, policy, prevention and outreach efforts.  The latest annual report is available here.  This effort includes several city bureaus and many community partners.  Working together, we've made Portland a national leader in invasive species management efforts. 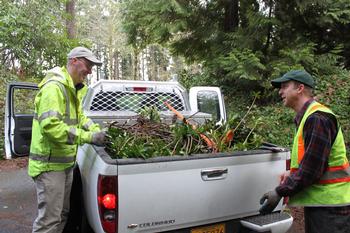 In Fiscal Year 2015, City of Portland programs removed or managed invasive species on more than 2,400 acres of land in the city, as well as ongoing efforts in the Bull Run Watershed.

Learn more about invasive plant species, what the city is doing, and what you can do at www.portlandoregon.gov/bes/invasives.