The Environmental Services Tree Program is cutting concrete to make way for trees.  Gone is some of the uninterrupted pavement along SE Grant Street and many other Portland streets.  Concrete cuts remove squares of the furnishing zone of the sidewalk to create a planting space for rain capturing, air freshening, heat reducing trees.  These trees will save ratepayer dollars by soaking up stormwater where it falls and improving livability in areas like the Central City, where there is little greenery. 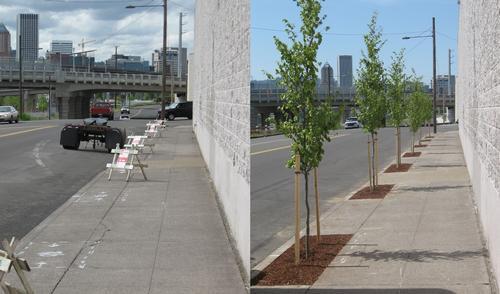 317 concrete cuts are planned for this year, bringing the total number of cuts to 1,000 since the program began in 2008.  That’s 1,000 trees planted where no trees could go before. 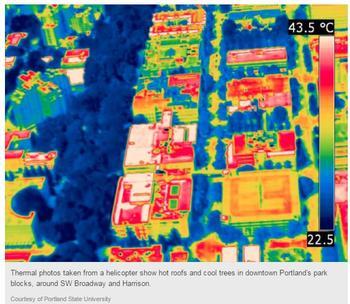 Besides the thousands of gallons of stormwater managed, one of the great benefits of making space for trees is that urban trees provide significant cooling of neighborhoods in hot summer weather.  This is important as our climate changes and we see more hot summer days.  To the right is a thermal photo from Portland State University’s research on public health and urban heat islands that shows the cooling effect of trees.

What an inspiring image. Yeah concrete cutters and tree planters!