Salvaging fish entails safely capturing and relocating fish away from a project or site to prevent them from dying in an area where they could get stranded or where other work in the stream might affect them.

Wearing a Ghostbusters-style backpack and carrying nets and buckets, Melissa and Chad, fish biologists with Environmental Services, lowered themselves into Balch Creek in Lower MacLeay Park. Balch Creek has its headwaters in Forest Park and flows overland for approximately 3 ¼ miles through the heavily-wooded park before it enters a pipe in the NW Industrial area and to the Willamette River.  The creek is home to resident coastal cutthroat trout and coastal giant salamanders. 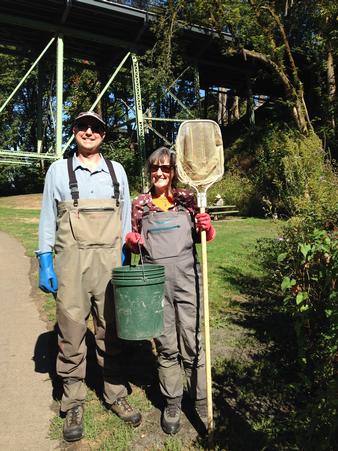 Chad and Melissa arrive on site for the fish salvage

Where Balch Creek enters a pipe, a large wooden trash rack keeps logs and other debris out of the pipe.  At this time every year, the trash rack needs to be cleaned out. Before that work could start this week, Melissa and Chad needed to catch some fish and amphibians and safely relocate them upstream, out of the project area. 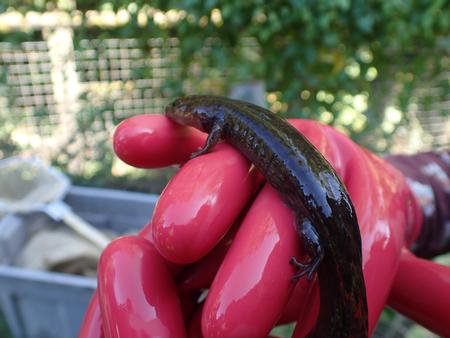 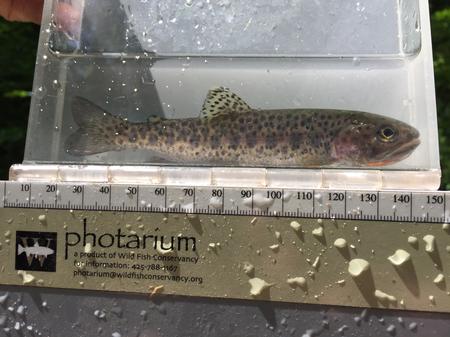 Carrying heavy equipment down tall ladders through large spider webs, Chad used his Ghostbusters backpack - actually a SmithRoot electroshocker – to apply a light shock to the water. This temporarily (and harmlessly) stunned aquatic vertebrates within a small radius so Melissa could scoop them up in her net.  After Melissa and Chad measured and inventoried the fish, they carefully transported salvaged fish and wildlife upstream. 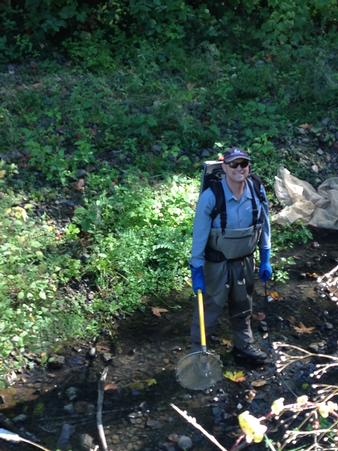 Chad in the stream with the electroshocker backpack

Great work by the city; gratifying to see that we have streams with healthy trout and amphibians and that the city has the expert and experienced personnel to care for them during maintenance operations.

Last Wednesday, 12/5/18 the water in Balch Creek appeared to be bright green. Any ideas to what would cause this?

what purpose did the dilapidated wooden frames adjacent to the fish ladder serve in balch creek? saw lots of clearing this past weekend at the fish ladder. great job!