Dec. 23 Update:  Repairs are complete and the street has reopened for travel now and through the holidays. In early January, crews will return to implement a long-term upgrades to the sewer system. 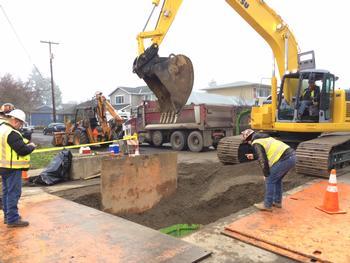 Dec. 20 notice of a sinkhole opening up on SE 49th Ave between Rhone and Bush streets:

(Dec. 22, 2016) - Environmental Services crews and a contractor working on a sinkhole repair at SE 49th Avenue just south of Powell Blvd finished replacing a damaged section of 97-year-old sewer pipe today and filled in the 16-foot deep sinkhole that opened up two days ago. They also found another deteriorated section 15 feet north of the sinkhole and are extending the temporary repair project through Friday.

Local access will be maintained and sewer service continues to all homes in the area.

In addition, BES is moving up a planned sewer replacement project for that area from July to early January to create a long term solution. The street had been slated for sewer pipe replacement in July as part of the Powell Sewer Repair Project, a multi-block capital project that began in May and is expected to finish in November 2017 to repair and replace aging public sewer pipe in Southeast Portland. The area’s pipes are between 60 and 104 years old.  The new system will also add capacity, replacing eight-inch diameter pipes with sections that are 18-inch to 24-inches in diameter. The larger pipes will dramatically reduce the chance of basement backups and overflows into the street that can occur during heavy rains. 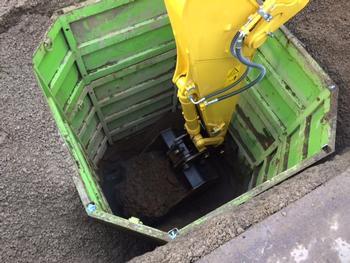 public on Friday. It will remain open through early January when crews will return to replace the eight-inch pipes with 18-inch to 24-inch diameter sections. That work is projected to last for up to eight weeks.

The Bureau of Environmental Services works with Portland residents and businesses to protect water quality, public health, and the environment through wastewater collection and treatment, sewer construction and maintenance, stormwater management, and stream and watershed restoration. Follow us on Twitter @BESPortland and visit www.portlandoregon.gov/bes

Photo captions: 1) Crews repaired and filled in a sinkhole on SE 49th Avenue 2) Crews excavated the street below the 16-foot deep sinkhole, digging to a depth of 20 feet to replace a 97-year-old deteriorated sewer section.