(June 21, 2017) - The Willamette River through Portland is cleaner than it's been in decades, thanks in large part to ratepayers’ investment in the $1.4 billion “Big Pipe” project that dramatically reduced combined sewer overflows.

How clean? Each week during summer months, Environmental Services tests for the 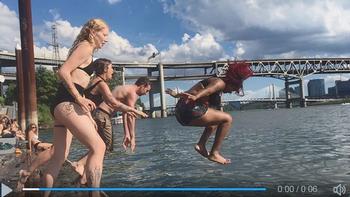 More than 98 percent of test results taken since the Big Pipe’s completion in 2011 have shown bacteria levels well within the state’s health standards, meaning the water is clean enough for swimming, boating and other summer recreation.

Before the Big Pipe project, also known as Portland’s CSO Control Program, stormwater mixed with sewage would overflow into the river almost every time it rained, triggered by storms with one-tenth of an inch of precipitation or more.  That meant more than 50 overflows a year, with some events lasting several days.

Bacteria exposure is the biggest health concern for swimming, according to the Oregon Department of Environmental Quality. Bacteria can originate from a variety of sources including sewage, agriculture, and fecal matter from wildlife and pets.

Now our system is designed to limit overflows to an average of four times per winter, occurring during periods of exceptionally heavy rains. Overflows occur even less often – on average once every three years – during the months from May to October.

There have been no overflows in July and August in the years since the Big Pipe’s completion.

“The Big Pipe, delivered on time and on budget, has been a big success,” said Commissioner Nick Fish. “Thanks to this investment in our critical infrastructure and in the health of the river, the Willamette is once again open to all kinds of summer activities.”

Environmental Services and Portland Fire & Rescue offer these additional river tips: Many factors affect safety on the river, including temperature, currents, and debris, as well as people’s ability in the water. Cold water is good for migrating salmon and other fish, but water below 70 degrees can be uncomfortable and unsafe for people.  People can find out river temperature in addition to bacteria levels through the Willamette River Recreation Index.

“Know the water, know your abilities, wear a life vest and don’t swim alone,” said Environmental Services Director Mike Jordan. “And please care for our public spaces by picking up your trash and pet’s waste.”