FINAL UPDATE (July 27, 2017) – After nearly three weeks of diverting sewage from a private pipe to prevent discharges to Woods Creek and working with the property owner to install a remedy, Environmental Services has concluded operations.

Environmental Services’ investigation showed that sewage and other wastewater from a commercial complex in the 5700 block of SW Multnomah Boulevard had inadvertently been discharging to the Fanno Creek tributary via a pipe that was designed to carry rainwater and stormwater only.  The management of that complex on Friday connected that pipe to the city’s public sanitary sewer, sending the flow to the city’s system for treatment.

Environmental Services has referred this incident to the city’s Bureau of Development Services, which administers the city’s building code, and the state Department of Environmental Quality, which protects public waterways within Oregon.

After being alerted by a report of an odor on July 9, the city dispatched a crew to the area and found a sewage discharge to Woods Creek along the April Hill Park natural area trail. Environmental Services set up a temporary containment area and pumping system to prevent further damage to the creek while investigating the source and then working with the property managers on remedial action.

On Wednesday, city crews removed pumps from the site and completed cleanup of the containment area and minor restoration of the bank along the creek. Warning signs will remain alongside the creek as long as the risk of bacteria exposure remains. April Hills Park and the natural area trail were not impacted and remain open to the public.

UPDATE (July 12, 2017) - Environmental Services has determined that the source of Sunday’s sewage release to Woods Creek was a  privately owned pipe and not a city sewer line. While that private pipe was designed to carry only rainwater to the creek, it appears that a private sewage pipe was mistakenly connected to it, leading to Sunday’s discharge of about 27,000 gallons to the Fanno Creek tributary. 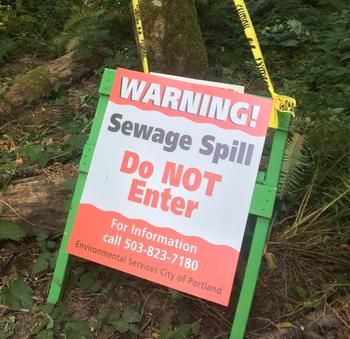 , and no additional discharge is occurring to the creek. Crews continue to conduct cleanup at the site adjacent to the April Hill Park Natural Area trail between April Hill Park and SW Multnomah Boulevard. Environmental Services continues its investigation to pinpoint the exact source of the sewage connection to the stormwater pipe.

Warning signs to avoid contact with Woods Creek remain in place as the cleanup and investigation continue.  April Hill Park and the adjacent nature trail are not impacted and remain open to the public.

Any additional updates will be posted online on this page.

(July 10, 2017) - Sewer maintenance crews responding Sunday to an odor report on the 6100 block of SW Canby Street found that sewage was spilling into Woods Creek, a tributary of Fanno Creek in Southwest Portland.

Crews estimate that about 27,000 gallons were released before they stopped the flow by diverting it to a nearby sewer line. Crews posted warning signs along Wood Creek and nearby Fanno Creek.

City crews continue to investigate and repair the sewer line.

As a precaution, the public is advised to adhere to the warning signs posted at the site and avoid contact with Woods Creek and Fanno Creek in that area for at least 48 hours because of the possibility of increased bacteria in the water.

While this investigation continues, most sewage overflows are caused by blockages. Pipes that fail or become blocked with grease, tree roots, and debris can cause sewage overflows. Environmental Services advises the public not to flush anything other than waste and toilet paper, and to not put anything down storm drains, which are intended for rainfall only.

The City of Portland treats an average of 70 million gallons of wastewater each day. Over one-third of Portland’s more than 2,500 miles of sewer pipes are over 80 years old. This sewage overflow is not related to the City of Portland's combined sewer overflow control system that protects water quality in the Willamette River and Columbia Slough.