Also at City Council, Commissioner Fish will introduce “Salmon Sanctuaries,” streams that City scientists and resource experts consider the best salmon habitat in the city. Salmon Sanctuaries are resting, feeding, and spawning areas that help the threatened fish through Portland on their journey to and from the Pacific Ocean.

“I am proud to live in a city where families and children can watch salmon swimming in their local creek,” said Commissioner Nick Fish. “In the Pacific Northwest, salmon are a key indicator of a healthy watershed. Today, we celebrate Crystal Springs as a model restoration project and commit to expanding Portland’s urban salmon habitat.”

City Council’s proclamation of September 24th as Salmon in Our City Day coincides with the fourth annual Salmon Celebration. On the banks of Crystal Springs Creek at Westmoreland Park from 11 a.m. to 4 p.m., the public is invited to join in a Native American blessing, salmon bake, and other activities to welcome the return of salmon to Portland. The celebration also is part of this season’s final Sunday Parkways, which will bring thousands of people through SE Portland.

Crystal Springs Creek, which has been extensively rehabilitated by the City and community partners, will be the city’s first Salmon Sanctuary. 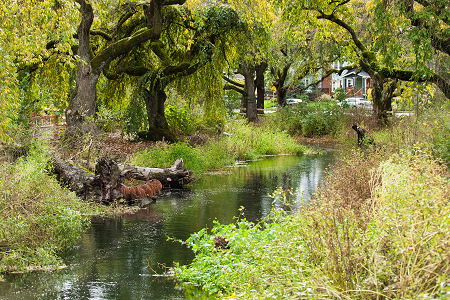 The designation comes with a $5,000 award for the Johnson Creek Watershed Council and the Crystal Springs Partnership, two community groups that are continuing restoration and stewardship activities.

The Salmon Sanctuary designation is the result of a citywide evaluation of salmon habitat by Environmental Services, Portland Parks & Recreation, the Portland Bureau of Transportation, Bureau of Planning and Sustainability and Water Bureau. The inter-bureau team identified eight other streams that are primed to achieve sanctuary status as restoration projects are completed, including:

In addition, the City’s scientists and restoration experts identified these candidates: Errol Creek and Deardorff Creek along Johnson Creek in SE Portland, the lower Columbia Slough in North Portland, and Balch Creek and Saltzman Creek in Forest Park.

The Salmon Sanctuary evaluations were conducted by the same inter-bureau team whose work last year led to Portland becoming the first certified Salmon-Safe city, a designation that means the city has met or is working to meet standards for limiting water pollution, conserving habitat and additional practices that go beyond current law. Salmon-Safe, a non-profit organization, administers those standards.

“When we invest in restoration, adjust our operations to be Salmon-Safe, and partner with others, salmon return to our city,” said Kaitlin Lovell, Environmental Services’ science manager. “We have a long way to go to see abundant populations, but each step builds on itself. In the age of climate change, it is even more important to create cold water sanctuaries where fish can find food, shelter and refuge in Portland’s rivers.”

Salmon have been documented in 125 miles of the city’s 300 miles of streams, but population numbers are low. The City of Portland has been working to recover salmon and steelhead since 1998 when steelhead in Portland were first listed as threatened under the Endangered Species Act. In that time, no populations have gone extinct and multiple restoration projects have delivered cleaner water to the Willamette, better habitat for fish and wildlife and improved treatment of stormwater.

Find more information, including a map of salmon streams, on Salmon in Portland

The Bureau of Environmental Services provides residents with programs to protect water quality and public health, including wastewater collection and treatment, sewer construction and maintenance, stormwater management, and stream and watershed restoration. For news updates, follow @BESPortland on Twitter and visit www.portlandoregon.gov/bes/news.