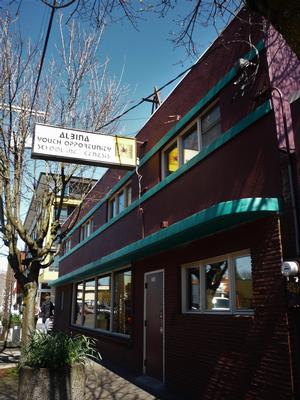 The Albina Youth Opportunity School (AYOS) contacted the Portland Brownfield Program for environmental site assessments when AYOS was considering expanding its programs. Prior to the school it served as a warehouse for Albina Transfer and also a gas station in the 1920's and 30's. An Environmental Site Assessment (ESA) was done in 2004 and a Phase II had been recommended at that time.

Northwest Health Foundation is a non-profit that has agreed to purchase the AYOS site. They have written a letter of understanding to hold the property for up to two years while Airway Science for Kids (ASK) raises funds to purchase the building, in partnership with the NE STEAM Coalition. The facility will be used to hold the administrative, training, and development offices of the NE STEAM Coalition. ASK has no N/NE facilities to build full scale model airplanes and this facility will fill those needs and allow ASK to serve N/NE children. Other coalition members will use the space for professional development trainings, workshops, and common curriculum development. The NE STEAM Coalition was formed to connect children of color, with an emphasis on African American children, to educational/career opportunities.

The Portland Brownfield Program was contacted for help in updating the Phase I ESA. In July 2017, a Phase I identified environmental concerns surrounding the historical use of the gas station and auto/truck repair business on the southwestern portion of the property. While a geophysical survey did not reveal any underground storage tanks, it was recommended to sample soil in the former tank pit as well as around the old fill ports. 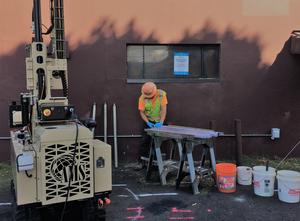 Multiple soil samples were taken during a Phase II ESA in September 2017. Samples taken from the area of the fuel dispensers revealed the presence of gasoline and associated volatile organic compounds (VOCs). This soil is under the parking lot, thus there is no potential for direct exposure to the contaminated soil unless that portion of the site is redeveloped. Northwest Health Foundation and ASK are in the process of deciding if testing for soil vapors indoors is warranted, based on the potential for vapors to migrate from the parking lot and into the building.