UPDATE Oct. 20, 2017 - Crews finished an emergency repair on the ruptured pipe this afternoon.  Pictures: top - city crews excavated a work zone to allow installation of a patch on the ruptured sewer line. Below - raw sewage underneath the Lombard overpass on Oct. 18.

(October 18, 2017) - City crews responded last night when a ruptured pipe released sewage onto a railroad track underneath the N Lombard Street overpass. The location is around the 12900 block of N Lombard Street. Traffic is not affected. 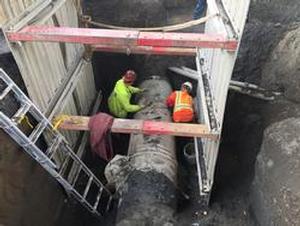 Sewage pooled along the tracks and an unknown quantity flowed down an embankment to the Columbia Slough. As a precaution, the public is advised to avoid contact with the slough due to increased bacteria in the water.

The release is ongoing and crews are on site working to contain the flow and repair a rupture in a pipe that carries sewage from the Lombard Pump Station to the city's Columbia Boulevard Wastewater Treatment Plant. As a further precaution, crews posted warning signs at the site, which is not easily accessible to the public.

The City of Portland treats an average of 70 million gallons of wastewater each day. Over one-third of Portland’s more than 2,500 miles of sewer pipes are over 80 years old. Pipes that fail or become blocked with grease, tree roots, and debris can cause sewage overflows. This sewage release is not related to Portland’s combined sewer overflow control system. 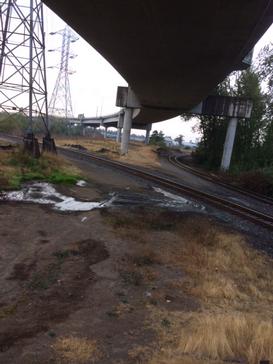 The Bureau of Environmental Services provides city residents with programs to protect water quality and public health, including wastewater collection and treatment, sewer construction and maintenance, stormwater management, and stream and watershed restoration. Visit www.portlandoregon.gov/bes and follow us on Twitter for news @besportland.