(Nov. 1, 2017) - Sewer maintenance crews responding on Halloween evening to reports of an odor found a broken pipe that was leaking sewage around the 4700 block of SW Lowell Court. The site is near the pedestrian-only bridge to Bridlemile School. 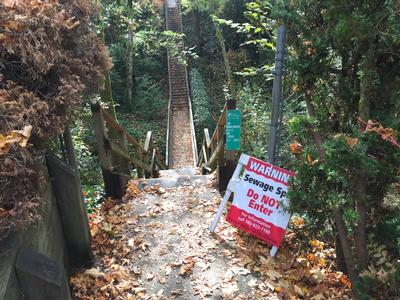 Crews installed a new section of pipe and stopped the release around midnight. The odor was reported at 5:30 p.m. and the source found at 7 p.m.  Residents said they had noticed the odor for about three days beforehand.

Field crews estimate the release at about 4,200 gallons and an unknown amount affected Ivy Creek. As a precaution, the public is advised to adhere to warning signs posted at the site and avoid contact with Ivy Creek in that area for at least 48 hours because of the possibility of increased bacteria in the water.

The City of Portland treats an average of 70 million gallons of wastewater each day. Over one-third of Portland’s more than 2,500 miles of sewer pipes are over 80 years old. This sewage overflow is not related to the City of Portland's combined sewer overflow control system.