(March 8, 2018) - Commissioner Nick Fish and the Bureau of Environmental Services today announced the opening of a natural gas fueling station at the City’s wastewater treatment plant.  The station will offer a clean-air alternative to diesel for City vehicles operating at the plant in industrial North Portland.

The natural gas fueling station is the first milestone in Environmental Services’ Renewable Natural Gas initiative, also known as the “Poop to Power” project. The station will provide fuel for the first natural gas vehicles in the City’s fleet. Initially, vehicles will fill up on natural gas from conventional sources, but once the full project is complete in 2019, the station will operate on renewable natural gas (RNG) produced as a byproduct of wastewater treatment. 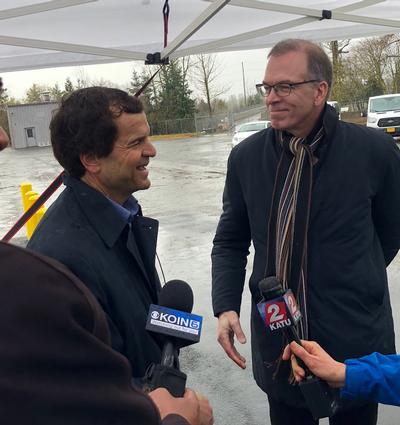 “Our future is green, and I’m very proud that we’re bringing the first natural gas vehicles to the City’s fleet,” said Commissioner Nick Fish. “When the “Poop to Power” project is finished, Portland will have a local, clean fuel produced from recaptured waste – not fossil fuels.”

Under the “Poop to Power” project that City Council approved in April, Environmental Services will recover nearly 100 percent of the waste methane from sewage treatment and convert it into market-grade renewable natural gas (RNG) for sale to displace diesel in truck usage. The RNG will be sold as truck fuel via NW Natural’s pipeline as well as at the fueling station, which also is being built and operated in partnership with NW Natural.

Trucks running on natural gas cut smog-producing pollutants by up to 90 percent and climate change emissions by up to 30 percent, according to the Portland Bureau of Planning and Sustainability. RNG’s climate benefits are even greater, offering up to a 90 percent cut in climate pollution.

The term “renewable” refers to natural gas produced from organic matter as opposed to fossil fuels.

“As a renewable source of natural gas, the city’s sewage will offer a steady and sustainable supply of clean fuel well 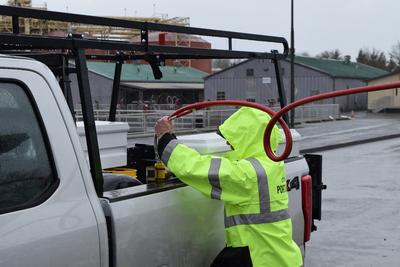 into the future,” said Michael Jordan, Environmental Services’ director. “The filling station also solves a business problem – the City as well as other businesses can only invest in natural gas vehicles if they have a place to fill up. We’ve created that place.”

Environmental Services is starting with six natural gas vehicles that it acquired or converted. That number will ramp up to 13 by year’s end, and the usage will continue to grow as the City converts and acquires additional vehicles to run all or in part on the cleaner fuel.

Adding another Oregon element, the vehicles are being converted by students at Linn-Benton Community College’s Lebanon campus.

The station’s natural gas also will be available for sale to treatment plant contractors transporting biosolids and grit for recycling or disposal, potentially displacing the diesel from those trucks as well.

The addition of the first natural gas vehicles to the City fleet aligns with the City of Portland’s climate action goals and strategy to move increasingly to more sustainable transportation options, including electric vehicles, bicycles and transit.  Currently, there are few electric truck options on the market.

The City’s fueling station joins a handful of others in the Portland metropolitan area that serve fleets such as Waste Management refuse trucks and Port of Portland airport shuttles. http://ngvamerica.stone-env.net/

The City of Portland’s Columbia Boulevard Wastewater Treatment Plant, 5001 N Columbia Blvd, is the largest in the state, serving about 600,000 residents and businesses. The RNG Initiative is the latest step Environmental Services is taking at the treatment plant to recover and reuse as many resources as possible. About 77 percent of the plant’s waste methane has been reclaimed to heat and power the treatment plant and for sale to a local roofing company. This project will move the plant to almost 100 percent methane recovery and tap into the emerging local and national market for renewable fuels. In addition, the plant recovers biosolids for use as an agricultural supplement on eastern Oregon wheat fields.