(April 18, 2018) - A major restoration project this summer will help bring salmon back to Oaks Bottom Wildlife Refuge, improve habitat for other wildlife and enhance the viewing experience for people. The project involves the closure of a portion of the Springwater Corridor.

Construction begins July 1 and extends through October 31, which is the “in water work window,” the time frame set by the state to minimize impacts to federally protected threatened salmon. 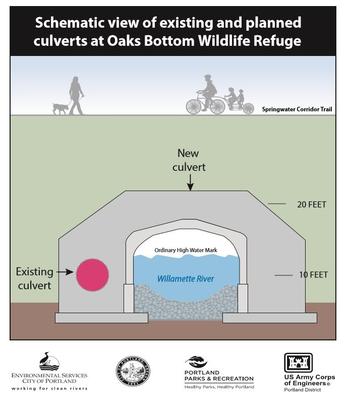 During those four months, a section of the Springwater Corridor trail will be closed in the area of Oaks Bottom Wildlife Refuge.

To help the public safely navigate this closure, partner agencies today released a bicycle map identifying options on newly improved routes on each side of the river: the Willamette Greenway on the west side extends from the Sellwood Bridge to South Waterfront and connects to downtown Portland. The new SE 19th Avenue neighborhood greenway on the east side will be completed this spring and connects to the Tilikum Bridge.  In addition to those newly improved routes, many other options exist in the city’s extensive bicycle network.

“Springwater Corridor is one of Portland’s most popular bicycle and pedestrian trails and Oaks Bottom Wildlife Refuge is a point of pride in a city that values nature,” said Mike Jordan, Environmental Services director. “Project partners wish to notify the public early and often about the summer closure, options for alternate routes, and the importance of the restoration project. The City has enlisted the might and dollars of the U.S. Army Corps of Engineers to reconnect the river and refuge for native salmon and create healthy habitat for all wildlife that rely on the refuge.”

The habitat restoration project is a collaborative effort between the City of Portland’s Bureau of Environmental Services and Portland Parks & Recreation and the federal United States Army Corps of Engineers, which will manage construction. The project will remove a small pipe culvert that blocks salmon and replace it with a large open bottom passage that will allow salmon to access the wetland refuge for food and rest from the Willamette River.

During construction, crews commissioned by the Corps will cut open the berm that supports the trail and adjacent railroad tracks, leaving a large gap as crews remove and replace the culvert. 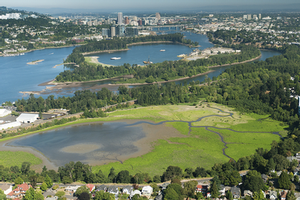 In addition, the project will improve the water flow in the refuge’s tidal slough channels to benefit all wildlife, including the 175 species of birds that use the protected area. Oaks Bottom Wildlife Refuge, established in 1988, is one of only two wildlife refuges in the city and the largest remaining natural area in the lower Willamette River floodplain. The site is managed by Portland Parks & Recreation.

Crews also will remove invasive plants, build a wildlife viewing platform next to the trail to improve the viewing experience for people and replant the area next spring with 8,500 native trees and shrubs.

The Corps is paying $4.9 million, or 65 percent, of the $8.8 million project cost, with the City paying the remainder.

The Oaks Bottom habitat restoration project is one of a series of collaborative restoration projects between the city and the Corps. The agencies recently restored Westmoreland Park and Crystal Springs Creek, which is now designated a city salmon sanctuary. Next is a major project in Tryon Creek - the agencies have received authorization from Congress but are awaiting funding to remove a culvert that is blocking salmon access to that area’s prime habitat. 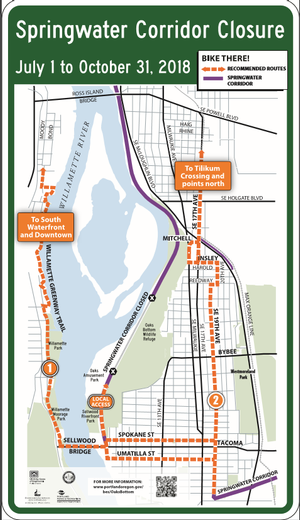 The Bureau of Environmental Services works with Portland residents and businesses to protect water quality, public health, and the environment through wastewater collection and treatment, sewer construction and maintenance, stormwater management, and stream and watershed restoration.