Blessed milk thistle presents something of a dilemma. On the one hand, it is grown for the herbal supplement market; on the other hand, it has escaped cultivation and is over-running parts of California. For the time being, milk thistle is uncommon in northwest Oregon. Let’s keep it that way! Early detection means that we have a chance of eliminating this alien plant invader from Portland. 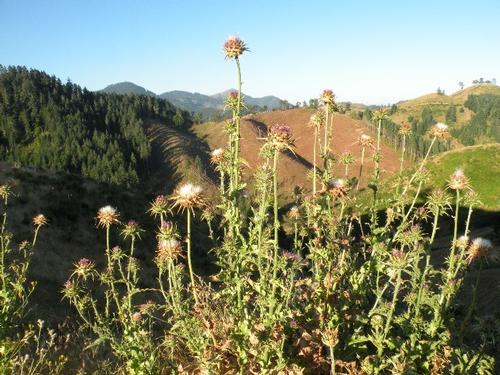 Blessed milk thistle is a Required Eradication species in Portland. That means – if you see it, you are required to report it: Call Mitch Bixby with the Environmental Services' Early Detection/Rapid Response Program at 503-823-2989 or email mitch.bixby@portlandoregon.gov.

Where have we seen milk thistle?

It has been sighted in several locations along the Columbia Slough and on Sauvie Island, and is relatively more common in Clark County, Washington. As with most invasive species, it is typical to first see patches along transportation routes like railways and roadways. Clark County, Washington, reports active management of several infestations, as does Clackamas County. To date, aggressive management appears to be substantially reducing known patches.

Milk thistle is known to form dense patches that originate in open, disturbed areas. Like other thistles, these plants have persistent root systems and produce large amounts of windblown seed, making management difficult. Milk thistle reduces plant diversity as other species are displaced. Invasions are of particular concern in forage lands, where milk thistle also poses a health hazard to livestock.

How can you identify milk thistle?

Milk thistle can grow to be six feet tall with distinctive white stripes in the leaves. Milk thistle is also very spiny, more so than bull thistle, with flowers and seedheads ringed by exceptionally sharp spines. 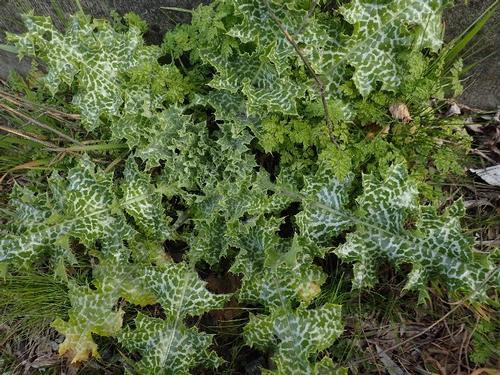 Distinctive white stripes on the leaves can help distinguish blessed milk thistle from other thistle species. 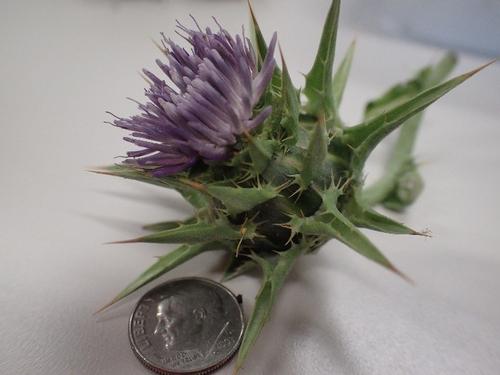 Sharp spines adorn the flowers and stems of the blessed milk thistle.

What can folks do about it?

Control where it goes

Control where it grows

Dig: Cutting and digging is possible, but not especially effective on larger infestations. These are also particularly spiny plants, which discourage casual handling.

If you suspect you’ve found milk thistle, the City of Portland requires you to report it.  Still, because of its prickly nature, you may decide to take advantage of the free management assistance available from the city.  You can report suspected patches to Mitch Bixby with the Environmental Services' Early Detection/Rapid Response Program at 503-823-2989 or mitch.bixby@portlandoregon.gov.