(August 22, 2018) - The U.S. Army Corps of Engineers and the City of Portland reached a major milestone in the Oaks Bottom habitat restoration project this week as site preparation is complete and construction of the culvert begins.

The Corps is working with the City of Portland’s Bureau of Environmental Services and Portland Parks & Recreation to bring salmon back to the Oaks Bottom Wildlife Refuge. The project’s focus is to replace a small pipe culvert that blocks fish 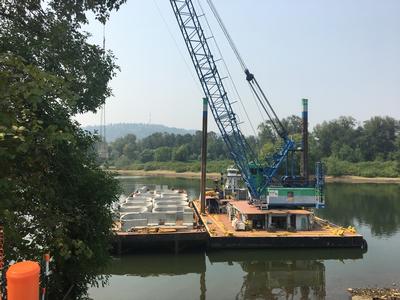 access with a large, open bottom passage that will allow juvenile salmon to reach the wildlife refuge for food and rest as they migrate toward the ocean. Work crews are also re-grading the tidal slough channels within the wetland to improve water flow and enhance habitat for salmon and other wildlife, including otter, beaver and 175 bird species.

Up to this point, construction crews have focused on preparing the site—installing temporary coffer dams to isolate the site from the river, salvaging fish and mussels, diverting water from the construction site—and excavating through the berm that supports the Springwater Corridor and railroad tracks.

“The project has reached a critical milestone, and the work is proceeding on schedule,” said Jim Adams, project manager for the Corps. “Our construction crews have worked hard to prepare the site, and now they’re piecing it all together. It’s exciting to see the culvert itself take shape.”

This week, prefabricated sections of the larger open-bottom culvert arrived by barge, and construction crews are using a barge-mounted crane to deliver those sections to the site. Crews will then assemble the culvert sections like puzzle pieces to form the new passage. After assembly, crews will refill the berm, and replace the railroad tracks. Crews will also remove the existing water control structure, which is no longer serving its intended purpose, finish re-grading the channels, and replace the Springwater Corridor in October. In the spring, project partners will replant the area with 8,500 native trees and shrubs.

The construction team must complete the majority of the work during the “in-water work window” between July 1 and October 31, which is the timeframe allowed by law to minimize impacts on federally-protected salmon.

During the project, the Springwater Corridor trail is open to the wildlife refuge, Oaks Amusement Park and the Oregon Yacht Club, but closed as a through trail. Partner agencies released a bicycle map showing two newly improved routes that prioritize non-motorized travel on each side of the river: the Willamette Greenway on the west side, and the new SE 19th Avenue neighborhood greenway on the east side. The Springwater Corridor will remain closed through Oct. 31, 2018.

Environmental Services is project lead for the City. Oaks Bottom, managed by Portland Parks & Recreation, is one of only two wildlife refuges i 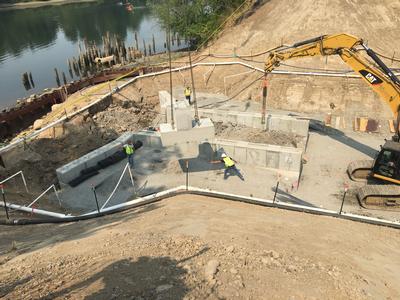 n Portland and is the largest remaining natural area in the lower Willamette River floodplain.

This habitat restoration project is one of a series of collaborative restoration projects between the City and Corps. Earlier this decade, the three agencies restored Westmoreland Park and Crystal Springs Creek, which is now designated a City salmon sanctuary. Next, Environmental Services and the Corps plan a Tryon Creek restoration project. The agencies have received authorization from Congress and are awaiting funding to remove a culvert that is blocking salmon access to that area’s prime habitat.

The Portland District works with non-federal partners, like the City of Portland, to plan, design and build projects to restore aquatic ecosystems, while meeting other missions. Often, these projects aim to naturally restore floodwaters or tidal connections, which improves water quality and enhances habitat for fish and wildlife.