(January 10, 2019) - A sewer line clogged with debris  overflowed late this morning from a manhole on the south border of Dickinson Park & Woods in Southwest Portland. The sewage reached an unnamed creek in the park.

As a precaution, people are advised to avoid contact with the creek for 72 hours because of the possibility of increased bacteria in the water. Warning signs are posted at the site. 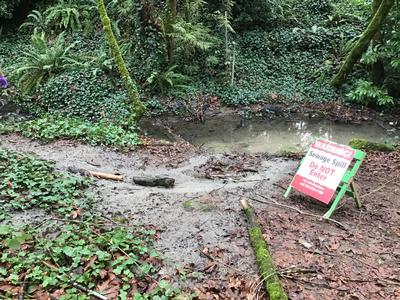 City crews responded to the site at about 11:30 a.m. and found sewage overflowing from a manhole on the 10800 block of SW 57th Avenue. They stopped the release around 2:45 p.m, clearing the sewer line of debris and cleaning up the area.

Sewage overflows often are preventable. Pipes that become blocked with grease, tree roots, and debris are the most common cause of sewage overflows. While the contents of the debris that caused today’s release are unknown at this time, Environmental Services advises the public to protect public health, property and our environment by following these tips:

* Keep grease out of drains -  Place grease in a container and then in the trash, not down kitchen drains.

* Use toilets for pee, poo and (toilet) paper - Avoid flushing rags or wipes or anything other than toilet paper and human waste.

* Only rain goes down (storm) drains - Outside the home, avoid pouring anything down storm drains, which are intended for rainfall only.

Over one-third of Portland’s more than 2,500 miles of sewer pipes are over 80 years old. Environmental Services has ongoing construction projects to replace and repair aging pipes throughout the city: www.portlandoregon.gov/bes/construction.  The sewage release today is not related to Portland’s combined sewer overflow control system that protects the Willamette River and Columbia Slough from overflows during heavy storms.

The Bureau of Environmental Services provides city residents with programs to protect water quality and public health, including wastewater collection and treatment, sewer construction and maintenance, stormwater management, and stream and watershed restoration. www.portlandoregon.gov/bes and @BESPortland.