(March 29, 2019) – A manhole that became clogged with debris led to a sewage overflow in the right-of-way on NE Greeley Avenue in an area called the Greeley Forest Garden. 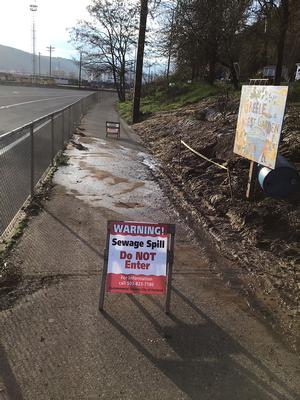 Crews cleared the blockage around 6 p.m and restored service to the area, estimating that about 1,500 gallons overflowed today from the manhole onto a bike path along NE Greeley Avenue and surrounding area. The sewage flowed to a storm drain that leads to the city’s wastewater treatment plant.

Crews estimate the sewage was contained within a small area. No creeks or other water body were affected.  The public is advised to obey warning signs that have been posted around the release.

The sewage release possibly has been occurring for several weeks but was reported today, according to a crew member who spoke with a resident of an adjacent transient camp.

Sewage overflows are preventable. Pipes that become blocked with grease, tree roots, and debris are the most common cause of sewage overflows. Environmental Services advises the public not to flush anything other than waste and toilet paper, and to not put anything down storm drains, which are intended for rainfall only.

This sewage overflow is not related to the City of Portland's combined sewer overflow control system which protects the Willamette River and Columbia Slough and manages excess stormwater and sewage during exceptionally heavy rains.