Update (Oct. 11, 2019) - Environmental Services congratulates the winning cities. We are inspired by the climate leadership of cities around the world.  It takes all of us to create #TheFutureWeWant. To see all 100 leading projects, visit www.cities100report.org

The Crystal Springs Watershed Restoration project in SE Portland improved the creek’s water quality and removed culverts so salmon and other fish can travel up the Willamette River tributary. As a result of the project, Portland City Commissioner Nick Fish declared Crystal Springs the city’s first salmon sanctuary in 2017. Led by the Bureau of Environmental Services, the project brought together community groups, government agencies, and indigenous communities to protect salmon and steelhead listed under the Endangered Species Act. 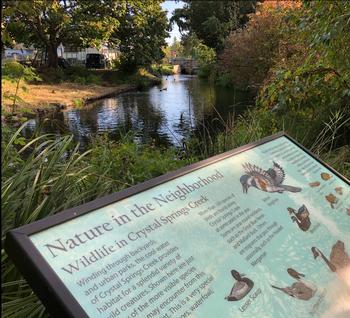 “Portland is proud to be a city where nature is celebrated and enjoyed,” said Commissioner Fish, who leads the Bureau of Environmental Services and Portland Parks & Recreation. “We are replicating our success at Crystal Springs Creek throughout the city. We are humbled to receive this international recognition; it will fuel our continued work.”

The international announcement today comes as Portland City Council proclaims October 6 as “Salmon in Our City Day” and invites the community to the 6th annual Salmon Celebration. This year’s event will be held on October 6 at Johnson Creek Park, where Crystal Springs Creek enters Johnson Creek.

“As we restore our rivers, creeks, and natural systems and honor salmon as part of our natural and indigenous heritage, we restore opportunities for our future and better prepare our city for climate change,” said Mayor Ted Wheeler.

Council will also receive a presentation on the City’s progress in meeting its Salmon-Safe re-certification. Portland-based non-profit Salmon-Safe independently certifies land management practices and their possible effects on water quality and salmon habitat. Portland Parks & Recreation has been certified Salmon-Safe since 2004. In 2016, the City of Portland became the first city in the world to achieve certification.

Following the Crystal Springs Watershed Restoration project, the Bureau of Environmental Services, Portland Parks & Recreation, and the U.S. Army Corps of Engineers completed a restoration project at Oaks Bottom Wildlife Refuge. The project included replacing an old culvert with a “salmon subway” that allows fish to access the Refuge for the first time in over 100 years. City Council just approved another culvert replacement project in the Tryon Creek watershed.

“I’m proud that both of my bureaus are leaders for salmon, for our environment, and for combating climate change,” said Commissioner Fish.

Mayor Wheeler is scheduled to be in Copenhagen on October 10 for the C40 World Mayors Summit where the winner will be announced. Urban leaders from across the globe will share bold strategies and actions to meet the climate goals set by the Paris Agreement. C40 Cities is a network of the world’s megacities committed to climate solutions. It is funded in part by the Bloomberg Philanthropies, the organization established by former New York Mayor Mike Bloomberg that administers the Cities100 report and awards.

This is the second time C40 Cities has recognized Portland’s climate leadership. Previously, Portland was recognized for its innovative Climate Action Plan as one of the first cities in the world to act at the local level.

For more information, including a virtual tour of Crystal Springs and a video of wild coho spawning in the newly restored Crystal Springs habitat, see www.portlandoregon.gov/bes/crystalspring

The Bureau of Environmental Services works with Portland residents and businesses to protect water quality, public health, and the environment through wastewater collection and treatment, sewer construction and maintenance, stormwater management, and stream and watershed restoration. www.portlandoregon.gov/bes  @BESPortland