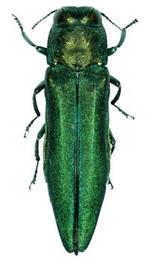 What is the emerald ash borer?

The emerald ash borer (EAB) is an invasive species that is predicted to reach Portland in the next 5-10 years. Native to eastern Eurasia and likely introduced to North America via infested shipping materials, the EAB is an ecological specialist whose larvae and adults collect and feed exclusively on ash species within the genus Fraxinus (Family: Oleaceae).

The EAB is considered one of the most destructive forest insects in U.S. history. The initial North American detection in 2002 was triggered by the abrupt and widespread killing of ash trees in southeast Michigan and Ontario, Canada. By 2018, the EAB had reached 35 U.S. states and five Canadian provinces, leaving hundreds of millions of dead ash trees in its wake. Learn more at the Emerald Ash Borer Information Network.

How does it spread?

The emerald ash borer lays eggs on ash trees which then hatch into small caterpillar-like “larvae” that then burrow into trees and kill them. People moving infested firewood and/or wooden packing materials is the main way EAB travels long distances. An adult EAB can also fly several miles in its 3-week lifespan. 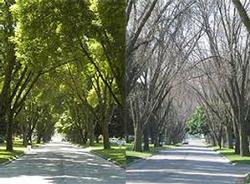 Why are our ash trees threatened?

Unlike ash trees in EAB’s native Asian range, North American ash species have not co-evolved with EAB and are easily killed by it. Nearly 100 percent of ash trees in an area can be killed by the EAB. In terms of risk, EAB presents a worst-case scenario: North American ash trees are both highly sensitive and highly exposed to EAB infestations. (Photo at right shows before and after an infestation in Ohio. Photo by Daniel A. Herms.)

Portland Parks & Recreation surveys estimate ash is the fourth most common tree in Portland, making up about 4.3 percent of all trees inventoried. EAB will most likely result in thousands of dead trees across the city, causing some serious safety issues when branches and limbs fall.

What are the long-term impacts?

Oregon ash (Fraxinus latifolia) is the only native ash found in the region, and it is highly susceptible to EAB. Without intervention, EAB threatens to cause extinction of Oregon ash trees. Oregon ash occurs in many habitat types including along tributaries of the Willamette River, where it provides shade and bank stability. Loss of ash trees will result in a loss of shade on streams and rivers increasing water temperatures and directly harming native fish. Warmer water means less food for salmon and trout and greater chances of disease.

What the City is doing about emerald ash borer?

To learn more about Portland's efforts to prepare for the emerald ash borer, contact Dominic Maze at dominic.maze@portlandoregon.gov or 503-823-5988.