(Aug. 5, 2020) - In an effort to prevent tear gas residue and other pollutants from reaching the Willamette River, the City of Portland Bureau of Environmental Services is planning today to clean six storm drains around the Multnomah County Justice Center and the Mark O. Hatfield Federal Courthouse.

The action follows weeks of deployment of tear gas and other crowd-dispersal agents. Environmental Services has received reports from the public, and documented several instances of power washing that flushed contaminants into the street and to storm drains. 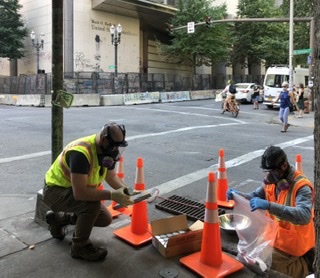 It is against City Code to flush any material into the City’s storm system, which is for rainwater only. In some parts of the city, including portions of downtown, rainwater is sent through sewer pipes to the City’s wastewater treatment plant. In other areas, such as the blocks surrounding the courthouse and justice center, stormwater pipes flow directly to the Willamette River.

Typically, rainwater mixes with dirt, motor oil residue, and other debris as it washes over city streets and to the stormwater system.  But the sustained use of CS gas and other agents by Portland Police and federal authorities poses a new and unknown pollution source.

“Our primary goal is pollution prevention,” said Matt Criblez, Environmental Services’ compliance manager. “We know that a certain amount of these chemicals have settled into the City’s storm drains. We are going to remove as much as possible to prevent that material from being flushed into the Willamette River.”

Crews will vacuum out the drains, and send the sediment to a commercial landfill. Crews will clean out six storm drains and are working on getting permission to access a seventh, which is behind the courthouse fence.

The public can play a role in protecting the Willamette River. Because of the federal Clean Water Act and the City and the public’s actions, the river is improving for salmon and fish habitat, and is clean enough for swimming and other water recreation. The public is asked to: