In 2004, Environmental Services paved three blocks of streets in the Westmoreland neighborhood with permeable pavement that allows water to go through the street surface and into the ground. It is the first use of this type of permeable paving material on a public street in Portland, although similar materials are used locally in parking lots and private driveways.

Environmental Services paved about 1,000 feet of street surface with interlocking concrete blocks. They look like brick but are actually high-strength concrete. One block of SE Knapp Street was paved curb-to-curb with permeable blocks. The other streets – SE Rex Street and SE 21st Avenue – were paved with a center strip of standard asphalt and permeable pavement in both curb lanes. A fourth block was paved curb-to-curb with standard asphalt.

The project is an alternative to the standard approach of capturing stormwater in a pipe, treating it, and discharging it to a surface stream. The permeable pavement allows water to infiltrate the ground through the spaces between the blocks filled with fine rock. Two layers of rock below the pavers provide a strong base for the street and help the infiltration process. Geotextile fabric layers below the base rock further reduce  pollutants carried into the soil as the water infiltrates. 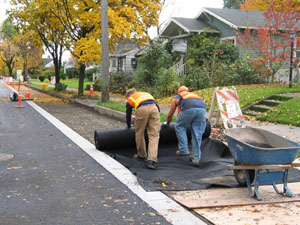 Portland uses several innovative approaches to reduce the amount of stormwater that flows through sewer pipes and discharges to rivers and streams. Approaches include downspout disconnection, vegetated infiltration areas, constructed wetlands, increased tree canopy, ecoroofs, green streets, and permeable pavement. The goal is to replace the pipe it, treat it, discharge it method with models that improved water quality in a more natural way.

By removing stormwater from the combined sewer system, the Westmoreland project can reduce CSOs, stream pollution and basement sewer backups. It will also reduce the total volume of wastewater in the sewer system, reducing long-term costs of operating and maintaining the system.

The Westmoreland project will help evaluate the costs of building permeable streets and their performance over time. Several monitoring points in the project area will allow technicians to collect water samples to monitor how well the pavement infiltrates water and if it helps improve water quality. The Portland Office of Transportation will evaluate how well the street holds up to residential use, as well as the costs and challenges of maintaining the new surface. New methods and equipment – like vacuum sweepers - will be used to clean the streets and keep them free of weeds and debris.

The Portland bureaus of Environmental Services, Water and Transportation designed and built the Westmoreland project jointly. Additional funding came from an Innovative Wet Weather Program grant from the U.S. Environmental Protection Agency. The construction cost was $412,000.

In 2003, Environmental Services installed large diameter sewers in the streets now included in the Westmoreland Permeable Pavement Pilot Project.  Because of the deteriorated condition of the original concrete and asphalt section, lack of base material, and the heavy equipment used for the sewer work, the project required full street reconstruction.

The scope of the resurfacing meant the City of Portland had to meet the water quality standards for redevelopment required by the city’s stormwater management manual. The permeable pavement project was designed and built as a cooperative effort of three City bureaus:  Environmental Services, Water, and the Office of Transportation.

SE 20th Avenue and All Intersections 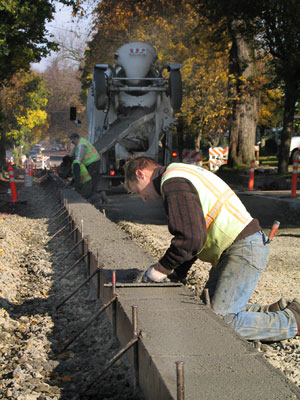 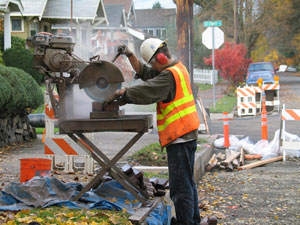 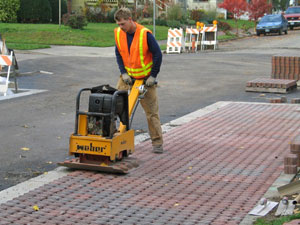 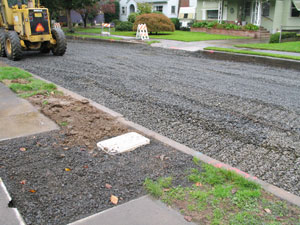 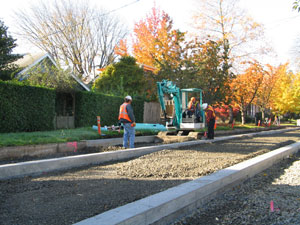 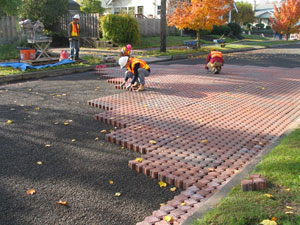 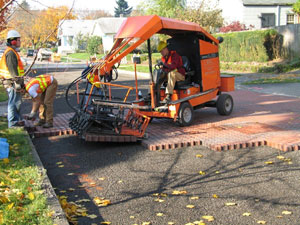 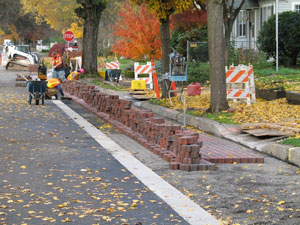 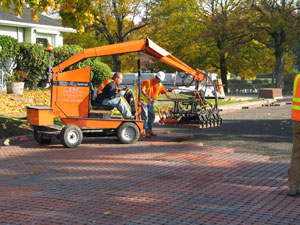 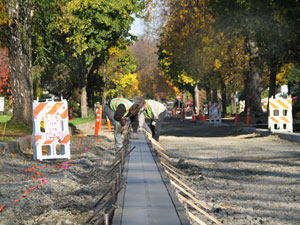 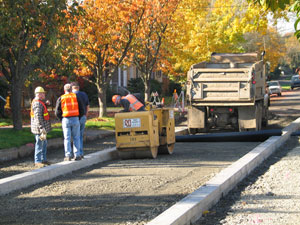 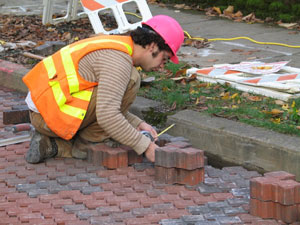 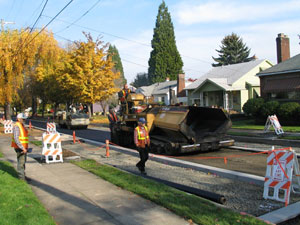 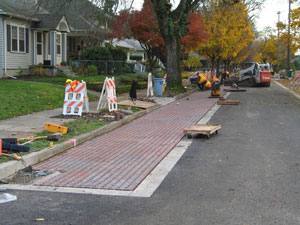 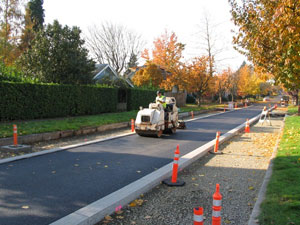 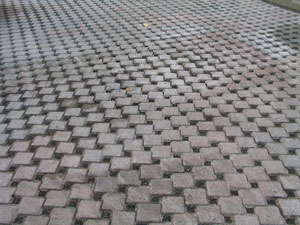 In summer 2005, the City of Portland completed paving four blocks of North Gay Avenue where Environmental Services installed large-diameter sewer pipes in 2001. The project area is on Gay between North Wygant and North Sumner Streets. 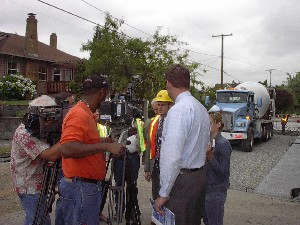 The project is a joint effort of Environmental Services, the Portland Office of Transportation, and the Portland Water Bureau. Parker-Northwest Paving of Oregon City was the City’s contractor.

When it rains, stormwater runs off North Gay Avenue into the City’s combined sewer system where it mixes with sanitary sewage. Some of the combined sewage goes to the wastewater treatment plant and some overflows to the Willamette River. With porous pavement, most or all of the stormwater will filter through the street surface into layers of rock below the street, and then into the ground. The existing storm inlets will remain to take any excess runoff. 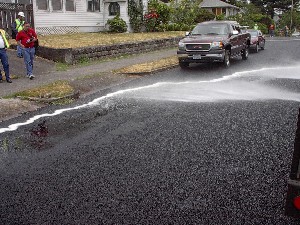 Environmental Services received grants from the federal Environmental Protection Agency (EPA) in 2002 and 2003 to allow the City to test new ways of handling stormwater. The Gay Avenue project is one of several partly funded by the EPA grant.