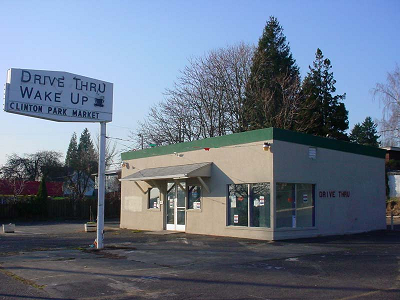 A service station operated on this site on the corner of SE 57th and Division, across from Atkinson Elementary school, from about 1928 until 1987. After that, it became the Clinton Park Market. 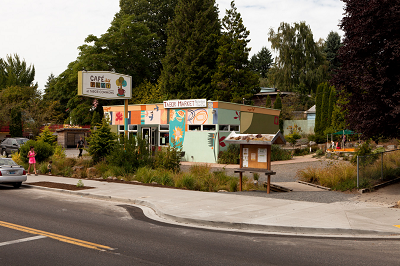 In April 2005, neighborhood leaders worked with a team of graduate students at Portland State University's Master of Urban and Regional Planning program to organize and facilitate a design charette and develop a site analysis and resource directory. During the charette, the community worked directly with architects and landscape architects to articulate their priorities in a design concept.

Neighborhood leaders worked with the Portland Brownfield Program and the State of Oregon Economic and Community Development Department to secure grant resources for environmental cleanup. Underground storage tanks and contaminated soil were removed in the summer of 2008.

After cleanup, Café au Play opened for business and served the community from 2006-2015. SE Uplift is in the process of deciding what will happen with the space.