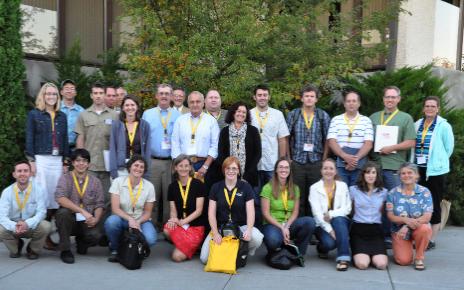 On a recent sunny weekend in Eastern Oregon, Solar Now! (www.solarnoworegon.org), a collaboration between the City of Portland, Solar Oregon, Oregon Department of Energy and Energy Trust of Oregon, held its first-ever Solar Now! University at Blue Mountain Community College in Pendleton. Solar Now! University brought together more than 30 municipal and community leaders representing five Eastern Oregon communities looking to learn about resources for creating their own solar initiatives.

The conference shared practical tools that communities need to grow local clean energy programs and to connect with other like-minded communities in their area. Attendees learned why solar is a smart choice for homeowners and businesses. The Cities of Pendleton and Hood River, and Sherman County formally joined the Solar Now! partnership. The partners received a digital tool kit and other supporting materials that will help them operate a community solar program of their own.

"Solar Now! University was the best organized, content-rich and authoritative training in Oregon's solar strategy,” said Art Hill, vice president of economic development at Blue Mountain Community College. “The team and their presentations prepared us to act as solar ambassadors in our communities."

Solar Now! was created to help volunteers, organizational leaders, municipalities and solar champions establish local solar outreach programs. With the right resources, training and support, community and municipal leaders can create their own community solar initiatives. Current financial incentives for homeowners cover up to 80 percent of installed costs and even more for businesses, making Oregon's incentives some of the best in the nation.

“The City of Portland, in partnership with the United States Department of Energy’s Solar America Cities Program, is
working to increase market demand for solar,” said Susan Anderson, director, City of Portland Bureau of Planning and
Sustainability. “We are delighted to share the practical tools from the Solar Now! program with local governments in
Eastern and Central Oregon.”

The City of Portland launched its first solar program in 2006 with the help of a grant from the U.S. Department of Energy's Solar America Cities program. This grant allowed the City to work with regional and national partners to accelerate the installation of solar energy systems in Portland.

"This program is a valuable opportunity to bring together local governments, businesses, residents and stakeholders to expand clean energy use and promote new green jobs in local communities,” said Assistant Secretary of Energy Efficiency and Renewable Energy Cathy Zoi. "Portland's success and leadership as a Solar America City will offer important best practices and lessons that will help jumpstart new solar initiatives across the State of Oregon."