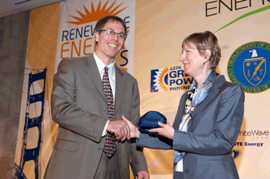 Portland, Ore. — The City of Portland announced today that it has received a 2011 Green Power Leadership Award from the U.S. Environmental Protection Agency (EPA). The annual awards recognize the country’s leading green power users for their commitment and contribution to helping advance the development of the nation’s voluntary green power market. EPA presented Portland with the Green Power Community of the Year award at an event held in conjunction with the 2011 Renewable Energy Markets Conference in San Francisco, California, on November 16, 2011.

“We are proud to receive this award from the U.S. Environmental Protection Agency, and we value our long-standing partnerships with Portland General Electric and Pacific Power,” said Portland Mayor Sam Adams. “The purchase of green power by our citizens and businesses helps our community become more sustainable, while also sending a message to others communities across the U.S. that supporting clean sources of electricity is a sound business decision and an important choice in reducing climate risk.”

In partnership with Pacific Power and Portland General Electric, Portland was one of only two communities nationwide to receive a Leadership Award for using green power in amounts that meet or exceed EPA purchase requirements for residents’ and businesses’ collective green power purchase. Portland residents and businesses currently voluntarily purchase nearly 709 million kilowatt-hours (kWh) of green power annually, which is enough green power to meet nine percent of the community’s electricity use. Green Power Communities (GPCs) distinguish themselves through their green power usage, leadership, citizen engagement, renewable energy strategy, and impact on the green power market.

“It was said a long time ago about Portland that the wealth of this city is found in its citizens,” said Pat Egan, Pacific Power’s vice president of customer and community affairs.  “Portland has proved that again by this tremendous example of our commitment to renewable energy.”

“Congratulations to the City of Portland for exemplifying sustainable leadership,” said Carol Dillin, PGE’s vice president of customer strategies and business development. “Together Portlanders have built one of the strongest renewable power communities in the nation and truly have earned the honor of a Green Power Leadership Award.”

According to the U.S. EPA, the Portland community's green power purchase of nearly 709 million kWh is equivalent to avoiding the carbon dioxide (CO2) emissions of nearly 96,000 passenger vehicles per year or the CO2 emissions from the electricity use of nearly 61,000 average American homes annually.

Portland has a long history of engaging its residents, businesses, and stakeholders in developing and implementing strategies to reduce carbon emissions. In 1993, the city released its Carbon Dioxide Reduction Strategy, which was followed eight years later by the joint Multnomah County-City of Portland Local Action Plan on Global Warming. As of 2009, local emissions had declined 22 percent per capita since 1990 and had fallen to 2 percent below 1990 levels on an absolute basis. Today, the City’s Climate Action Plan has a community-wide goal of reducing overall greenhouse gas emissions by 80 percent by 2050.

In 2010, as part of Portland’s effort to reduce the region’s carbon footprint, the City of Portland joined forces with Pacific Power and Portland General Electric and challenged residents and businesses to support green power through their utility’s voluntary program. The challenge was a great success, with Portland more than tripling its goal of 1,000 new signups with a total of 3,130 new residential and business customers.

In October 2010, Portland became an EPA Green Power Community — the largest in the nation at the time. Currently, Portland has the highest participation rate among Green Power Communities of its population size with more than 15 percent of its utilities’ customers buying renewable energy equal to nearly over 9 percent of its total electricity load.

About City of Portland Bureau of Planning and Sustainability

To create and enhance a vibrant city, BPS combines the disciplines of planning and sustainability to advance Portland's diverse and distinct neighborhoods, promote a prosperous and low-carbon economy, and help ensure that people and the natural environment are healthy and integrated into the cityscape. BPS provides a forum for community engagement and education, and is a catalyst for action. With a city full of partners, BPS develops creative and practical solutions on issues as far ranging as comprehensive, neighborhood and environmental planning, urban design, waste reduction and recycling, energy efficiency and solar technologies. This innovative, interdisciplinary approach strengthens Portland's position as an international model of sustainable development practices and commerce. www.portlandonline.com/bps

Pacific Power provides electric service to more than 730,000 customers in Oregon, Washington and California. Our goal is to provide our customers with value for their energy dollar, and safe, reliable electricity. Pacific Power is part of PacifiCorp, one of the lowest-cost electricity producers in the United States, with 1.7 million customers in six western states. For more information, visit www.pacificpower.net.

The Green Power Partnership is a voluntary program that encourages organizations to buy green power as a way to reduce the environmental impacts associated with electricity use. The Partnership currently has nearly 1,300 Partner organizations voluntarily purchasing over 21 billion kilowatt-hours of green power annually. Partners include a wide variety of leading organizations such as Fortune 500® companies, small and medium-sized businesses, local, state, and federal governments, and colleges and universities. For additional information, please visit www.epa.gov/greenpower.

About the Green Power Leadership Awards