Centers: Anchors to Complete Neighborhoods
Not all of Portland has safe and convenient access to local services like grocery stores and neighborhood businesses. In some areas, services are scattered or missing, or streets may lack sidewalks, bikeways or other safe connections providing local access. The draft Comprehensive Plan proposes a series of centers located across Portland to make it easier for people to meet their needs locally, expanding Portlanders’ options to live a healthy, active lifestyle.

Centers are places with concentrations of neighborhood businesses and community services. Future housing growth will be focused in these areas to allow more Portlanders to live close to services. When services and other destinations are clustered in these compact centers, economic viability is strengthened and walking, biking or taking transit, and driving less becomes much easier.

The centers policies build on previous planning efforts in Portland over the past 30 years, reflecting community desires and best practices. Most of the centers identified on the maps are based around existing neighborhood business districts and already have zoning that allows the density of services and housing needed to create thriving centers. But some may require infrastructure improvements or other strategies to support their role as centers.

Centers: Anchors to Complete Neighborhoods (PDF) defines the characteristics and benefits of developing centers in Portland.

Types of Centers
The draft Comprehensive Plan proposes a variety of different types of centers, ranging from local to regional. The draft policies prioritize the greatest amount of growth and higher density housing in centers that have good transit service, are close to a substantial number of jobs, and are large enough to support a broad range of commercial and community services.

Larger centers with more population generally have taller buildings and a broader range of services.  To support their roles, they will be a priority for public investments, especially in locations with infrastructure deficiencies.

Types of Centers (PDF) describes the scale and uses for the four types of centers identified in the draft Comprehensive Plan.

Corridors and Connections
The draft Comprehensive Plan proposes a system of corridors and connections to complement the role of centers in creating healthy, connected neighborhoods. Civic Corridors, Transit Stations and City Greenways will be enhanced as key connections that link people to the rest of the city and region. Besides getting people from here to there, these connections will be improved over time as distinctive places that support the community and livability. Areas of focused activity and development along corridors often serve as the commercial cores of centers. 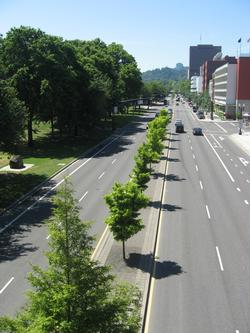 Corridors and Connections (PDF) provides examples, including before-and-after images that show how Portland could be enhanced through improvements to these systems.

Portland’s Five Pattern Areas
Portland’s natural and built patterns — the hills and streams, street and block patterns, building types and open spaces — give Portland’s neighborhoods and districts their distinct character. This is true whether you are walking along an Inner Eastside main street, live near forested hillsides and streams in Southwest, or have a view of buttes and fir trees in East Portland.

Future development and public infrastructure should respect and enhance each area’s positive characteristics, strengths and assets. While all areas of Portland need features like safe connections and centers providing services and housing opportunities, these connections and centers will look differently in different parts of the city, contributing to each area’s distinct sense of place. 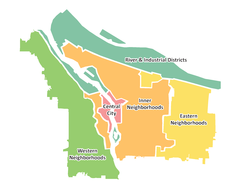