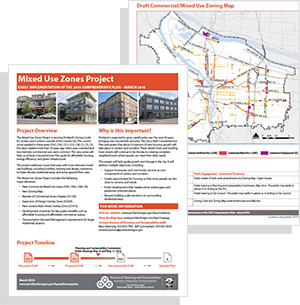 The Mixed Use Zones Project is developing new mixed use planning and zoning designations to help implement the Centers and Corridors concepts that emerged with the Portland Plan’s Healthy Connected City strategy. Portland’s new Comprehensive Plan proposes to focus commercial activity and a majority of new household growth in mixed use “centers and corridors” that will serve as the anchors of convenient, walkable neighborhoods.

The project focuses on revising the City’s Commercial and Central Employment (EX) zones that are applied outside of the Central City. These zones — in which mixed use development is allowed — were created in the early 1990s, when auto-oriented and lower intensity commercial uses were more common. The Mixed Use Zones Project will revise these zones to address issues that arise with newer intensive mixed use forms, such as building mass and/or bulk, design and context, transitions and step-downs, and ground floor uses. 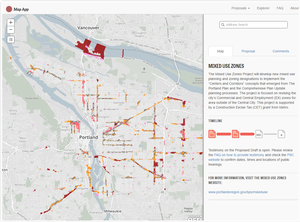 The new mixed use zoning regulations are expected to be applied to commercially zoned property outside of the Central City. This includes main streets, commercial corridors and commercial nodes citywide, and places like the Gateway Regional Center; town centers such as St Johns, Hollywood, Lents and Hillsdale; and several MAX transit station areas.

How We Got Here — Project Process and Milestones