Holiday schedule changes, how to set out your holiday tree, and what to do with extra holiday trash.

The ordinance was adopted and went into effect on December 18, 2019. 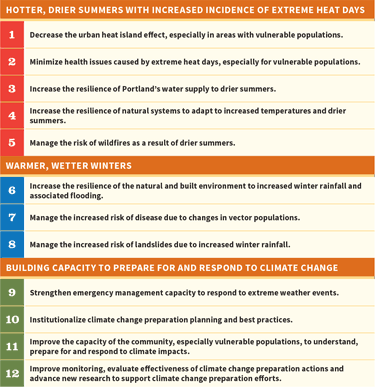 The City of Portland and Multnomah County’s new draft Climate Change Preparation Strategy  and draft Risk & Vulnerabilities Assessment have been released for comment. Technical experts, organizations, businesses and members of the public are encouraged to provide feedback on the documents before the Portland and Multnomah County council members consider adopting the documents later this year.

The draft materials describe how climate change will affect the region and what actions are proposed to improve resiliency and to protect communities. Through April 11, 2014, comments may be submitted online, by e-mail to bps@portlandoregon.gov or by mail to City of Portland Bureau of Planning and Sustainability, Attn: Michele Crim, 1900 SW 4th Ave., Suite 7100, Portland, Oregon 97201.

“The analysis and implementation relies on a strong collaboration between the City and County, and across City agencies,” Mayor Charlie Hales said. “I just returned from the global C40 conference on reducing greenhouse gas emissions and climate risk. What I found is that cities everywhere face daunting impacts from climate change and we need to take a prudent, responsible approach to reducing risk and building resilience. I welcome feedback on the draft findings and proposed actions.”

The draft strategy and the companion background report are key deliverables from Portland’s 2009 Climate Action Plan. They explore the potential impacts of climate change on various sectors, including people, infrastructure, and natural systems likes rivers and wetlands. Potential impacts to food production, climate migrants, energy systems and the economy are also explored in the strategy. The strategy proposes 12 objectives and more than 80 actions to build resilience into Portland and Multnomah County’s policies, operations, services and infrastructure over the coming years.

“We’ve already taken many actions that help us be more resilient and prepare for climate change. These actions benefit local air and water quality, protect greenspaces and create wonderful places for Portlanders to live, work and play,” said Susan Anderson, City of Portland Bureau of Planning and Sustainability director. “We appreciate the longstanding collaboration among many local partners that will help to implement this strategy.”

“This strategy is an excellent example of the collaboration between Multnomah County and the City of Portland. Our Health Department staff are working to prepare for an increase of heat-related illnesses and deaths, mosquito-borne diseases, asthma attacks from poor air quality and

“Certain populations, including low-income households, communities of color, linguistically isolated households, renters and older adults may be less able to prepare for and recover from impacts from climate change, said Claudia Arana Colen, health equity coordinator, Upstream Public Health. “I am pleased to see the needs of vulnerable populations prioritized, and expect Portland and Multnomah County to deliver on their commitments to these communities as they implement this plan.”

Developed by the City of Portland and Multnomah County, the draft materials were informed by advisors from the Oregon Climate Change Research Institute, Oregon Department of Land Conservation and Development, Oregon Department of Geology & Mineral Industries and the Portland Planning and Sustainability Commission.

Carbon emissions from the burning of fossil fuels and from land use changes, including deforestation, are the primary drivers for the climate change we are experiencing today and expect to see in the future. Reducing carbon emissions remains a crucial component of climate change preparation work. The assessment and the strategy are linked to the City of Portland and Multnomah County Climate Action Plan, which integrates the City and County’s work to slow the effects of climate change while also preparing for the impacts that we will experience. Portland and Multnomah County are currently in the process of updating the Climate Action Plan, which was originally adopted in 2009. Visit Portland’s Climate Action website to learn more about the Climate Action Plan update project and other existing climate efforts.