Portland – Today, Environment Oregon was joined by Hacienda Community Development Corporation (CDC) and the City of Portland to release a new report:

“Shining Cities: At the Forefront of America’s Solar Energy Revolution.” 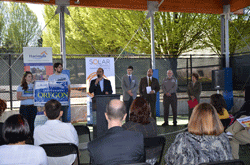 Portland’s efforts to engage different communities in solar energy, through programs like Solarize Portland and Solar Forward, has helped propel Portland into the top 20 of major cities for the amount of solar installed, according to the new Environment Oregon Research and Policy Center report, which provides a first-of-its-kind comparative look at the growth of solar in major American cities.

“As a pollution-free energy source with no fuel costs, solar energy is an important part of the City’s overall strategy to protect the climate and reduce carbon emissions,” said Mayor Charlie Hales. “The Bureau of Planning and Sustainability has helped demonstrate what’s possible at the local level with great programs like Solarize Portland and Solar Forward, but there’s much more to be done.”

The top 20 solar cities in this report have more solar power within their city limits than was installed in the entire U.S. just five years ago.  Through installation of approximately 2,000 systems by businesses and residents, Portland has seen its local solar electric capacity grow from under 4 MW to over 15 MW in the past five years. BPS’s online Solar Map offers a dynamic way to view the growth and locations of residential and commercial solar installations throughout the metro area over the past decade.

“Hacienda has long believed that environmental amenities should be available to Portlanders of all income levels,” said Victor Merced, executive director, Hacienda Community Development Corporation.  “We are excited for the opportunity to build on our commitment to green building in Cully with the addition of this partnership with Solar Forward.”

Report highlights benefits and smart solar strategies for cities
As the cost of solar drops, there is a growing awareness of solar power as a mainstream energy solution with widespread benefits for our health, our economy and the environment.

The report highlighted the benefits of solar energy, including:

Solar energy avoids pollution—Pollution-free energy from the sun reduces air pollution that contributes to urban smog and climate change.  It also helps save the massive amount of water that’s normally consumed during the cooling of fossil-fuel-burning power plants.

Solar energy protects consumers— Since solar has no fuel costs, it can serve as a hedge against the rising cost of fossil fuels.

The report pointed to policies and programs that encourage investment in solar PV installations, which have been adopted by local leaders in solar cities:

“The sky’s the limit on solar energy.  Portland is a shining example of solar leadership,” said Charlie Fisher, Field Organizer with Environment Oregon, “But, we’ve barely scratched the surface of the potential to capture this pollution-free energy source.   By committing to bold goals and expanding on the good policies we’ve adopted, we can take solar to the next level.”

To view the report, visit http://environmentoregoncenter.org/reports/orc/shining-cities