Meet Marty Stockton, who stepped into her new role as Southeast District Liaison with the District Planning team in February 2014. A native Portlander with multigenerational roots in Southeast Portland, Marty has worked as a planner for the City of Portland at BPS and the Bureau of Development Services since 2006, building relationships with community members all over the city. 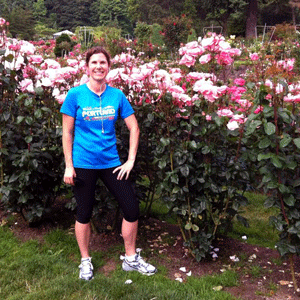 Since she started working at BPS, Marty has distinguished herself for her work with Portland’s diverse communities, having led the public engagement process for the Portland Plan and now the Comprehensive Plan Update. Her strong commitment to historically underserved communities was recognized in 2012 and 2013 by the Office of Equity and Human Rights’ New Portlanders Program with a “We Are Portland” award for engaging newcomer communities.

As a district liaison, Marty said she is “committed to working with Southeast Portland communities to navigate both the preservation and redevelopment efforts in the process of creating vibrant neighborhoods.” She serves as a technical advisor and resource to Southeast Portland neighbors, organizations, businesses and institutions and meets with two or three neighborhood groups per week. The district spans from the Willamette River to the I-205 freeway, and from I-84 to Portland’s southern border. BPS employs 6 other District Liaisons who play a similar role in other parts of the city, including two for the Central City.

Marty and her family have deep roots in Portland, reaching back to when her great-grandfather emigrated here a century ago from Germany. “Rumor has it that my great-grandmother was one of the first women to hit a hole-in-one at the Eastmoreland Golf Course,” Marty claims. Her childhood memories of Southeast Portland include gardening on her family’s leased plot in Ladd’s Addition, “where my brother and I use to walk to the Ladd’s Circle corner store for popsicles.”

As a child she would drive with her mother through SE Portland to get to her aunt’s house in Montavilla. “As long as I can remember, Portland has been changing – some of it good, some of it bad,” she reminisces. “I became a planner because I wanted to make a difference in the way the city grows.”

Having lived in several different Portland neighborhoods, she currently resides in Northeast with her husband and two daughters.