The Kilowatt Crackdown competition kicked off in January 2013, and 64 commercial buildings in the greater Portland metropolitan area and Vancouver, Wash., completed the 12-month program to save energy and reduce operating expenses. The goal of the competition was to increase adoption of energy efficiency best practices by providing building owners, managers, engineers and operators with resources to implement efficient practices as a competitive advantage. The program provided assistance in benchmarking energy use, analyzing opportunities for savings, identifying action items to improve building performance, implementing these improvements in partnership with Energy Trust of Oregon and Clark Public Utilities, and reporting on progress.

“Collaborating with premier partners allows us to elevate Portland as a leader in energy efficiency and in the reduction of carbon emissions,” said Susan Steward, Executive Director of BOMA Oregon.  “Bringing the public and private sectors together in this effort, with the largest amount of office floor space participating, maximizes our reach in bringing energy-efficient resources to the greater Portland metropolitan area.”

Business leaders set an example for all Portlanders

Kilowatt Crackdown determined the building winners by overall performance and improvement, with categories for buildings in their inaugural year in the competition as well as multiple-year participants. In addition, the jury awarded special recognition for “most aggressive” building team and an individual award for “energy efficiency champion.” Portland Mayor Charlie Hales joined the competition sponsors to recognize the buildings at the awards event yesterday evening.

“Increasing energy efficiency can save money and increase asset value. It also means happier tenants who want to stay in your buildings longer,” said Portland Mayor Charlie Hales. “As we update and implement our Climate Action Plan, I will look to our community to follow the example of business leaders like these building managers. As we’ve seen with this competition, reducing carbon emissions can be a great financial investment.”

One participant in the competition was Oregon Pacific Properties, which manages the Forum Building and continually makes efforts to emphasize sustainability throughout the building. As part of the Kilowatt Crackdown program’s technical scoping, Oregon Pacific Properties discovered gaps in the sheet metal panels on the building’s roof and made improvements to seal the building envelope to reduce the heating and cooling load. In addition, the company identified maintenance issues with the building’s automatic thermostat, and made improvements in the filtration of the cooling system to make it more energy efficient. The Forum Building received third place in a tie for highest-performing building in its inaugural year in the competition. 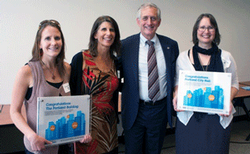 First place - The Portland Building, managed by City of Portland

Most Aggressive - OHSU Center for Health and Healing, managed by CBRE