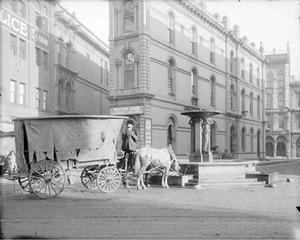 The Skidmore/Old Town Historic District was listed in the National Register of Historic Places in 1975 and designated a National Historic Landmark in 1977. It flanks the Burnside Bridge and is bounded roughly by the Willamette River to the east, NW 3rd Avenue to the west, NW Davis to the north and SW Stark to the south. This vibrant mixed use district is home to the iconic Skidmore Fountain and one of the finest collections of cast-iron architecture west of the Mississippi River.

Unfortunately, by 1960 much of the district’s historic architectural fabric was demolished and replaced with surface parking lots that have presented challenges to redevelopment. To help protect the district’s remaining historic resources, past planning efforts established more limited development entitlements over the area than in other parts of downtown. The existing district design guidelines were adopted in 1987.

To help spur additional investment in the district, the Ankeny/Burnside Development Framework was developed in 2006 as a joint effort of the Bureau of Planning (now the Bureau of Planning and Sustainability) and the Portland Development Commission. Participants who engaged in the development of the framework document dealt with a wide range of issues, from the possible relocation of Fire Station 1 on Naito Parkway to finding a permanent new home for the Saturday Market.

The framework addressed these challenges with a strategy and priorities for guiding PDC investment in the district. In addition, the framework proposed changes to the existing regulatory framework, including new design guidelines, to facilitate more and better renovation projects as well as new development. Creation of the framework and anticipation of its implementation helped spark new development energy in the district, including the University of Oregon Portland Center moving into the White Stag Block, the renovation of the Smith Block, the establishment of Mercy Corps’ headquarters, and significant improvements to Tom McCall Waterfront Park to accommodate the Saturday Market, among many other functions.

Following on the Ankeny/Burnside Development Framework, the Bureau of Planning and Sustainability (BPS) developed new design guidelines and a package of Zoning Code amendments for the district. While the proposed new design guidelines had broad public support, the recommended code amendments included height increases within the district that were controversial. As a result, City Council did not vote on the code and guideline amendment package.

The updated Skidmore/Old Town Historic District Design Guidelines will provide clearer guidance for property owners, designers and developers as they consider alterations to existing structures and new construction in the historic district.