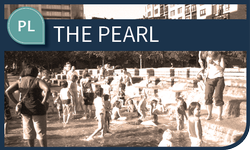 Characterized by a mix of housing, employment, retail, and arts and entertainment establishments, the Pearl is supported by a multimodal transportation network, a system of parks, affordable and market rate housing, and a growing job base.

The area combines new architecture within the context of its industrial past, with many former warehouse and industrial service buildings now repurposed for new uses. The residents of the Pearl are some of the most diverse in the Central City and include people at all income levels, families with children, seniors and students.

A highly livable and multimodal urban neighborhood, the Pearl is a culturally and ethnically diverse, family-friendly complete community, with excellent access to public amenities including the Willamette River, retail services, cultural institutions and public transportation.

The district is a twenty-first century model of social, environmental, and economic sustainability. Its industrial past and historical assets, high quality mixed-use development, exciting urban riverfront, shops, art galleries and restaurants attract visitors from all over the world, creating an ideal setting for its numerous creative-sector businesses. 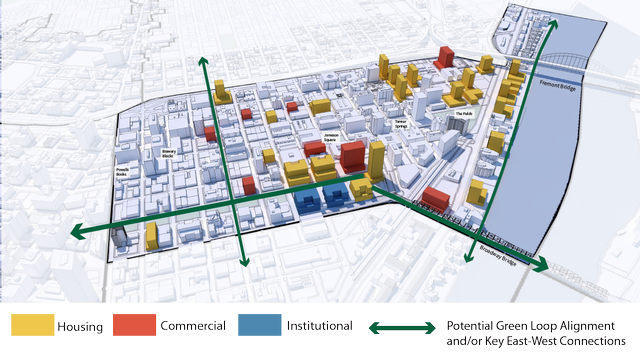 Between 2010 and 2035, the Pearl is expected to grow by 6,000 households and 4,000 jobs, for a total of 11,600 households and 14,700 jobs. This rendering illustrates a possible development scenario approximating future growth. The arrows illustrate a potential “Green Loop” alignment and key flexible street connections leading to the river and adjacent neighborhoods.

The Pearl hosts a truly diverse mix of residential, commercial, industrial and institutional uses. Attractions include the Brewery Blocks and Powell’s City of Books and great potential for new attractions exists at the United States Postal Service site and at Centennial Mills. Key intersections and gateways include NW 9th Avenue and Naito Parkway and West Burnside Street and NW Broadway.

The diagram also shows the potential Green Loop alignment along Park Avenue through the USPS site, with connections via Johnson and Flanders to Northwest Portland and the greenway trail.

View full-size maps in the PDF version of the Central City Districts.

Read about the Goals and Policies in the Draft Plan that will help with implementing the 2035 Vision and Urban Design Concept.