New construction in Portland’s mixed use centers and corridors has been on the rise since the economy turned around, and pent up demand for new housing and commercial development is being met by developers and builders.

While new construction is needed to accommodate Portland’s growing population, not all development has been welcomed by Portlanders. Community members near some of Portland’s developing centers and corridors (e.g., main streets like Division and Williams) have expressed concern about the size and scale of this new construction, as well as the transition to surrounding neighborhoods. Planners have heard that:

In response, the City of Portland is revising the city’s Commercial zones to improve regulations for new mixed use development.

Read the Mixed Use Zones Proposed Draft; then testify to the PSC in writing or in person. 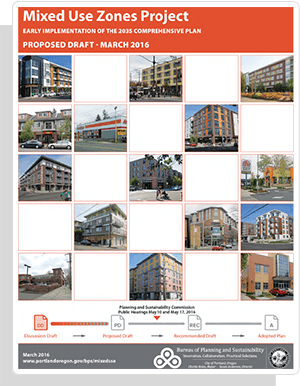 The Mixed Use Zones Proposed Draft reduces the number of zones applied to centers and corridors outside Portland’s Central City to four (instead of the current nine): three new Commercial/Mixed Use zones (CM1, CM2, CM3) that vary by the scale of development allowed, and one medium-scale Commercial Employment (CE) zone with a commercial and employment emphasis that is typically applied outside designated centers.

The new zones update development and design standards in a variety of ways to meet the goals of the City’s new Comprehensive Plan, respond to different development contexts, and address the needs and desires of a variety of community stakeholders. The new standards create incentives for new development that provide public benefits, such as affordable housing, and address other aspects of design.

Portlanders are invited to attend a public hearing, where the Planning and Sustainability Commission (PSC) will hear oral testimony on the Proposed Draft.

Check the PSC Calendar one week prior to the scheduled hearing to confirm the date, time and location. Learn how to testify to the PSC; read Tips for Effective Testimony. A continued hearing is tentatively scheduled for Tuesday May 17, 2016, at 5 p.m. — location to be announced.

The PSC also invites testimony on this proposal through May 10, 2016, in writing:

How were these proposed new rules developed?

The Proposed Draft was developed over the past two years with feedback from the public, including a project advisory committee, as well as technical advisors. Early on, project staff hosted several neighborhood walks to learn what community members think about new development in their neighborhoods, and what could be improved from neighbors’ perspectives. Staff also talked to architects, developers, housing advocates and business people to understand their perspectives and needs.

Following the public hearings in May, the PSC will hold work sessions in June and July to formulate its recommendation to City Council (remember to check the PSC calendar one week prior to the meeting to confirm). The project will then go before the Portland City Council for adoption.