2030 Objective: Generate or purchase 100 percent of all electricity for City operations from renewable resources 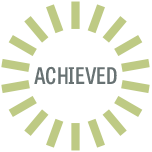 Sixteen City properties currently host solar arrays, ranging in size from 8 to 267 kilowatts, and representing nearly 700 kilowatts of solar capacity. That’s the equivalent of powering 140 homes annually in Portland. Four additional solar sites are in various stages of development at a Fire Station, Water Bureau groundwater pumping site, Bureau of Transportation site in East Portland, and a community center in SW Portland. The City anticipates these coming online by 2019.

The City purchases Renewable Energy Certificates (RECs) to account for the remaining electricity purchased from the utility companies. RECs offset the City’s use of fossil fuel-based power. In FY 16-17, the City purchased 114,762 megawatt-hours (MWh) of Renewable Energy Credits, which represents 77.6 percent of the City’s overall electricity usage.  A small percentage of these RECs are generated from the Klondike II Wind Farm in Sherman County, Oregon.  The remainder are sourced from wind facilities in the western United States.

In 2017, the City (and Multnomah County) established a goal to meet 100 percent of community-wide energy needs with renewable energy by 2050 (Resolution 37289). The resolution prioritizes the purchase of renewable resources over the purchase of RECS, with the intention of reducing reliance on RECs during the transition to 100 percent renewable resources over time. With this in mind, BPS is at the beginning stages of exploring options for going beyond RECs for City electricity purchases in the future.

Portland Fire and Rescue (PF&R) is developing the City’s first solar + battery storage project at Fire Station 1. The downtown location serves as an incident command post and houses the office of the Fire Chief and other administrative functions. The design includes a 30kW solar array paired with lithium ion batteries to provide flexibility during a prolonged power outage by supplementing the existing generator on the site. The project is receiving grant funding from Portland General Electric’s Renewable Development Fund. In addition, the City is partnering with Portland General Electric to develop the battery technology and software solution as part of a PGE demand response pilot.

The Bureau of Environmental Services uses biogas generated at the Wastewater Treatment Plant to heat and power its operations as well as nearby businesses. This method of producing heat and power is called co-generation. The co-generation system delivers three main outcomes:

The Portland Water Bureau has the City’s largest solar array on its Groundwater Pump Station. The 267.54 kW “Solar on the Slough” array was constructed, owned and managed by Bonneville Environmental Foundation for six years and was recently purchased by the City. The array is an example of using a public-private partnership in order to build renewable energy systems on City facilities. Energy from the array provides power to the pump station.