Preparing for climate change is an effort that the City of Portland launched in 1993, seeking to make the ‘Rose City’ a resilient and sustainable example for other cities around the world. Portland’s Bureau of Planning and Sustainability (BPS) plays a pivotal role in Portland’s climate leadership. In 2016, the City of Portland’s Climate Action Plan was recognized as best in the world by the C40 cities climate leadership group.

Portlanders want a resilient and sustainable city, which requires having a diverse job sector, with a diverse workforce

Released in 2014, a study from Harvard University analyzed 191 multi-sector conservation and preservation organizations in the United States, they ranged from mainstream NGOs, government agencies, foundations to boards of advocacy groups. The study concluded that the organizations were predominantly white, and that their focus needs to shift to engaging more people of color into the environmental field.

One national organization working to catalyze the shift and create opportunities for youth of color to find a career in the environmental field is Mobilize Green. Headquartered in Washington D.C., Mobilize Green hosts an annual conference and career fair in a different city every year, an event whose goal is to inspire, engage, and mobilize the next generation of diverse leaders to help communities solve equity and environmental challenges.

Mobilize Green convenes employers from the environmental industry, ranging from local governments, regional, state and national agencies. Students are then presented with a range of opportunities, from internships to full-time positions, as well as a chance to interview in the career fair. 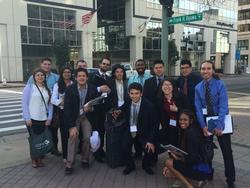 The 2017 Mobilize Green Conference and Career Fair kicked off at City Hall in Oakland, CA, with keynote speaker Randy Moore, Regional Forester for the U.S. Forest Service Pacific Southwest. Moore outlined his pathway to being a regional leader at the U.S. Forest Service, as well as the many internship opportunities that Mobilize Green offered through the U.S. Forest Service. Another speaker, Princeton University’s Assistant Professor Dr.Ruha Benjamin, encouraged students to step into the environmental sector to solve problems like dissimilatory designs and privatization of public needs. To demonstrate the concept of public needs being privatized, Dr. Ruha showed examples such as a public bench that needed to be fed coins to be used, which does not provide equal access to the general public.

Alfredo Gonzalez Valenzuela, a member of the solid waste and recycling team at BPS, attended the event as a panelist. He was joined by over 100 students from around the country, whom all had an interest in environmental justice, and would soon be looking to join the workforce upon graduation.

Alfredo first attended the 2016 Mobilize Green Conference and Career Fair in Seattle, as an environmental science student at Portland State University, looking to start his career upon graduation. So it was exciting for Alfredo to attend this year’s event in Oakland, CA, to speak as a panelist. Representing BPS, he was able to share his experiences and milestones leading up to joining the BPS team.

BPS has taken the initiative to cultivate the next generation of diverse, public service leaders who are committed to creating resilient cities. The Bureau’s Racial Equity Roadmap outlines a number of initiatives, to recruit, train, and promote staff of color. BPS is keen to reflect the diverse demographic future of Portland, through the Portland Climate Action Collaborative, a program which, among other goals, also seeks to diversify the pool of applicants for BPS positions.

Coming soon: Portland Sustainability: Equity and Diversity in the Workplace 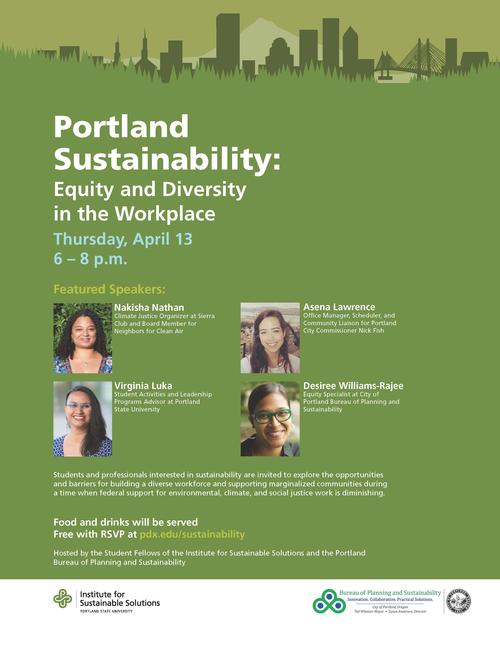 The Student Fellows of PSU’s Institute for Sustainable Solutions and the Portland Bureau of Planning and Sustainability will host students and professionals from diverse backgrounds who are interested in sustainability to explore and discuss the opportunities and barriers for building a diverse workforce and supporting marginalized communities. The event will take place at the Native American Community Center on April 13, 2017 from 6 p.m. to 8 p.m. RSVP