In the early and mid-20th century, restrictive covenants — along with red lining and other racist planning tools — prevented people of color, particularly Black residents, from buying and owning property in Portland. These restrictive covenants were placed in property deeds and titles. And their use was supported by government, landowners, real estate boards, realtors, banks and local neighborhood associations to enforce racial segregation of neighborhoods. Although they are no longer enforceable, many of these covenants are still on deeds today.

Covenant: “A written agreement or promise usually under seal between two or more parties especially for the performance of some action; the deed conveying the land contained restrictive covenants” — Merriam-Webster Dictionary

How did covenants work?

Covenants were used on many of Portland’s originally platted private developments, which served as the only restriction on land uses until Portland adopted its first building code in 1918. These covenants (applied to individual properties as well as larger developments) continued to be used even after 1948, when they were deemed unconstitutional by the Supreme Court.

Examples of racist covenants in Portland include:

“… no person of African, Asiatic, or Mongolian descent shall be allowed to purchase, own, or lease said premise …”

“… No Negroes, Chinese, Japanese, Orientals, or any person other than the Caucasian race shall rent, purchase, occupy or use and any building on any lot, except that this covenant shall not prevent occupancy by domestic servants of a different or nationality employed by the owner or tenant. …” 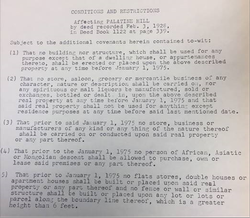 Property ownership is the main path to wealth creation for most people in the United States. The effects of this racist tool and others like it have served as an impediment to housing for people of color over the long term. Covenants prevented many from accumulating wealth through purchasing and owning properties that have increased in value over time. In Portland, the racial disparities in homeownership still exist today. An example at right shows a covenant from a 1928 title the forbids people of color from purchasing homes in Palantine Hill.

Greta Smith, a Portland State University Masters student in the Department of History, is studying the history of restrictive covenants in Portland. Through archival research and crowdsourcing, Smith has uncovered 20 racially restrictive covenants in neighborhoods such as Mocks Crest, Palatine Hill, Ferncrest, Laurelhurst and others. Her work is supported by the City of Portland and is based on a similar project at the University of Washington.

The Bureau of Planning and Sustainability has partnered with Smith to create an interactive map showing the location of racist covenants in Portland. The areas with covenants are shown in blue; click on one to see excerpts from the restrictive language as well as link to a Google document with an image of the actual covenant.

Smith’s biggest challenge is sifting through thousands of title deeds. The proof of racist covenants is there, but many homeowners do not scan their deeds or titles so they are unaware they exist. If you know of a restrictive covenant, please contact Greta Smith at gresmith@pdx.edu.

Racist housing policies have been a part of Portland’s history for generations and their effects continue to persist in the form of racial disparities in homeownership and wealth, segregation and vulnerability to displacement pressures. As Portland experiences an affordable housing crisis, more conversations about these inequities and their underlying root causes are needed.