The Multnomah County Board of Commissioners and the Portland City Council passed parallel resolutions in late September committing to establish a Clean Air Construction Procurement Standard. The Standard would require equipment used on City and County construction projects to dramatically reduce emissions from older diesel engines. 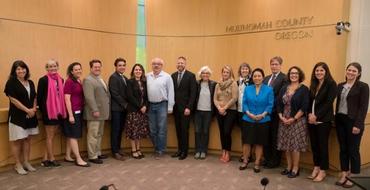 Clean Air Construction workgroup members and stakeholders pose for photos with the
Multnomah County Board of Commissioners.

“Some issues seem daunting,” County Chair Deborah Kafoury said Thursday. “Some are impossible for us to solve on our own. This is a chance where we can make a difference. We can control air quality in our community.”

“This is exactly what people elected us to do,” Portland Mayor Ted Wheeler said Thursday. “I’m very pleased the city of Portland and Multnomah County are working together to provide leadership on a regional approach. It’s very important that we work together to develop consistent standards to ensure our policies are feasible and will have a larger impact on reducing harmful emissions,” he said. The primary pollutants of concern from diesel engines are diesel particulate matter and nitrous oxides.

“In the last 25 years there has been growing evidence for health effects from diesel exhaust,” Kevin Downing, who led the state’s clean diesel efforts from 2000 until his retirement earlier this year, told the county board Thursday. The exhaust not only causes predictable lung conditions, but is a known human carcinogen according to the International Agency for Research on Cancer and has also been linked to autism, impaired cognition, and ALS.

“That’s because the particles are so small,” he said, “It acts more like a gas, and transports loads of toxins into the body.”

Portland and Multnomah County residents have the highest exposure to air toxics in the state and are well above national averages (link is external) for cancer risk and respiratory hazards from air toxics. Soot from older diesel engines is among the most prevalent and harmful airborne toxins in the region. According to the Oregon Department of Environmental Quality (DEQ), the Portland Metro area registers diesel particulate matter (PM) levels above the ambient benchmark concentration set by the state.

DEQ estimates (link is external) the emissions lead to more than 400 premature deaths and $3 billion in economic losses a year. More than 50 percent of diesel particulate matter in the region comes from construction equipment. People with lower incomes shoulder a disproportionate share of the pollution, as they are more likely to live in denser neighborhoods near congested roadways. Although air quality affects everyone, a 2014 Multnomah County Health Department report found African Americans are three times more likely to be exposed to diesel particulate matter, and Latinos are 2.5 times more likely, than white county residents. 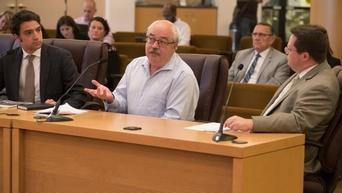 Kevin Downing has led the state’s clean diesel efforts from 2000 until his retirement earlier this year.

The action comes after the City of Portland and Multnomah County completed a $2.3 million upgrade (link is external) to their fleets in 2011, ensuring most older engines were retrofitted with pollution control devices. The City and the County also piloted clean construction requirements at that time. Since 2016, the County and the City have worked with a coalition of local jurisdictions to establish a single standard that could be applicable across jurisdictions and create a market for clean equipment. The goal is to speed up a transition to cleaner equipment with pollution controls. Because diesel equipment is so durable, the transition to newer equipment has been slow.

The coalition also includes Washington and Clackamas Counties, The Port of Portland, Metro and the Department of Environmental Quality.

Amelia Reiver Schlusser, a staff attorney at Lewis and Clark’s Green Energy Institute (link is external), encouraged county and city officials to strengthen the proposed Clean Diesel Procurement Policy by expediting the phase-in period and reducing the horsepower threshold from 100 to 25.

City and county staff will submit final procurement policies by the end of the year. The policy applies to non-road diesel equipment with equal to or greater than 100 horsepower, and on-road dump and cement trucks. It will include a phase-in period to allow contractors the time and flexibility to plan for the new standard. Some exemptions will also be available in the case of safety, emergency, or economic hardship. The City of Portland and Multnomah County will ask the Oregon Legislature to set aside a portion of the Volkswagen settlement money (link is external) to help disadvantaged, minority, and women-owned businesses upgrade their equipment to comply with the standard.