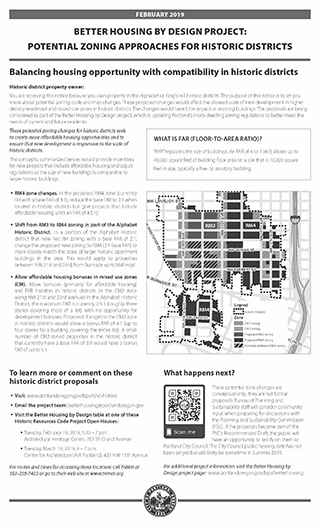 Did you receive a notice in the mail that looked like this? And/or do you live in the historic Alphabet or King’s Hill districts in NW Portland? Or, are you concerned about historic preservation or Portland’s need for affordable housing options?

If so, the City of Portland is interested in hearing your thoughts on potential zone changes that would adjust the allowed size of new buildings to improve compatibility with historic buildings in these special neighborhoods. At the same time, the proposals would expand incentives for affordable housing options for Portlanders in these and other historic districts.

The Better Housing by Design project is considering zoning code and map changes to encourage housing opportunities and affordable housing as well as to foster new development in scale with historic districts.

The potential changes would affect high-density residential (proposed RM3 and RM4) and mixed use zones (CM) in historic districts and include: 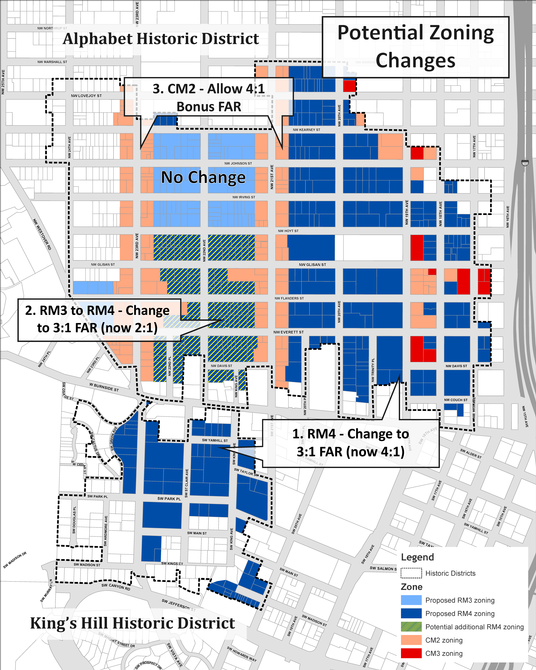 Map of zoning and potential changes in the Alphabet and King’s Hill historic districts.

What is FAR (floor-to-area ratio)? 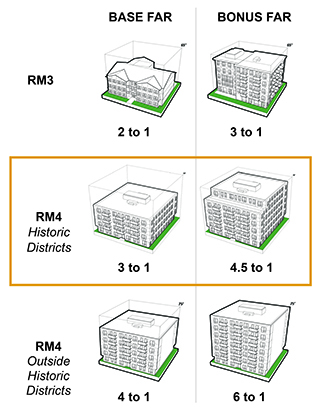 RM4 zone base and bonus FARs of 3:1 and 4.5:1 would accommodate the range of larger historic multi-dwelling buildings in the Alphabet and King’s Hill historic districts, such as these examples.

Why are we doing this?

The intent of these potential zoning approaches is to:

These zoning amendments would primarily affect new development. For those who own or live in an existing building, the changes would have little impact (except in the case of major additions). Historic landmarks and contributing structures in historic districts are protected by demolition review, which limits demolition of historic buildings.

Please provide questions and/or concerns about these potential zoning code and map changes by April 2, 2019, to: betterhousing@portlandoregon.gov

Or come see us in person at the Better Housing by Design table at one of the following events: 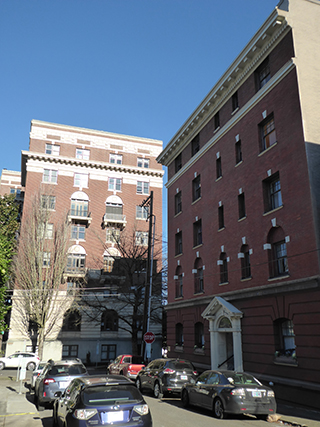 These potential zoning code and map changes are ideas only; they are not formal proposals. Project staff will consider community input in preparation for a work session with the Planning and Sustainability Commission on April 9, 2019. Public testimony will not be taken at this meeting, but community members can attend to listen to the discussion (please confirm dates, times and agendas one week prior by visiting the PSC Calendar ). The meeting will also be streamed live on the BPS YouTube channel.

If the Planning and Sustainability Commission decides to include these proposals in the Better Housing by Design Recommended Draft, the public will have an opportunity to testify on them in front of City Council. That public hearing date has not been set yet, but it will likely be sometime in Summer 2019.

The proposal also includes a special “deeper housing affordability bonus” available only for projects where at least half of units are affordable to households earning no more than 60 percent of median family income. In the RM4 zone, this bonus would allow up to a 6 to 1 FAR for qualifying projects (the required level of affordability would not be feasible for most development and would likely only be used occasionally by affordable housing developers). Current regulations for the RH zone allow an FAR of up to 7 to 1 when projects use amenity bonuses or FAR transfers. The draft regulations would limit most FAR increases to a 4.5 to 1 FAR, allowing FAR beyond this amount only for the deeper housing affordability bonus to prioritize housing affordability in historic districts. Achieving this scale would be subject to review and approval by the Historic Landmarks Commission. 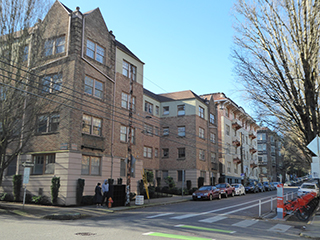 CM2. The primary commercial/mixed use zone in the Alphabet Historic District is CM2 (former CS zone), mapped along NW 21st and NW 23rd Avenues. Since May 2018, development in this zone has been limited to an FAR of 2.5 to 1 (equivalent to a three-story building covering most of a lot), with no opportunities for development bonuses (mixed use zone buildings with 20 or more units are required to provide affordable units but do not receive any bonus FAR when located in historic districts). Prior to May 2018, the CS zone allowed buildings to be built to a full four-story scale.  The Portland Planning and Sustainability Commission has provided initial direction to amend the zoning code to allow development bonuses and FAR transfers to be used in mixed use zones within historic districts citywide. This would allow a bonus FAR of up to 4 to 1 in the CM2 zone (maximum building height would remain 45 feet). This development bonus would allow four-story development similar in scale to larger historic buildings along the Alphabet Historic District’s main streets (see Select Sites – CM2 Zone). This bonus FAR of 4 to 1 is the same that is currently allowed in CM2 zones outside historic districts. Smaller projects that are not required to provide affordable units could also achieve some additional FAR (but not the full bonus) through transfers of FAR from other sites where historic buildings are being preserved. 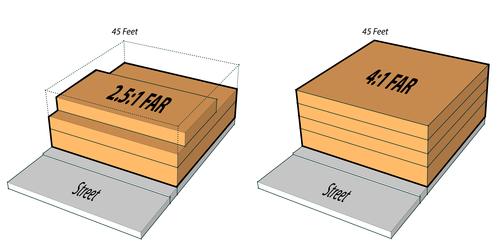 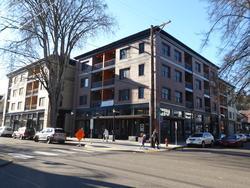 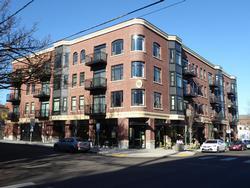 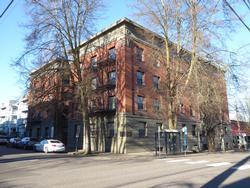 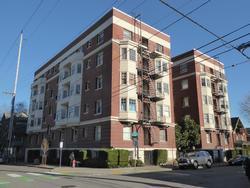