The BTS eGovernment team announces the launch of a new web-based version of the popular PDX Reporter mobile app. The new app (www.pdxreporter.org) was released on April 27, 2017, as a public beta and is currently available to all residents of Portland. It provides all the features of the native iOS and Android apps that it replaces, promises more streamlined maintenance, and sets the stage for the addition of new features and report types. 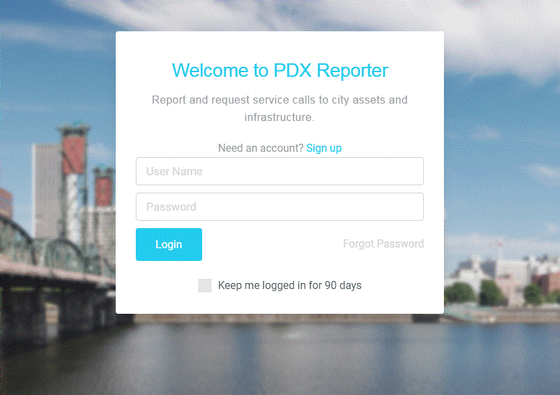 In 2010, the City released the first versions of the PDX Reporter mobile app for iOS and Android devices, originally named Citizen Reports. They provided residents a convenient way to report and request service calls to City assets and publicly maintained infrastructure, including parks, traffic signs, street lights, parking, potholes, plugged storm drains, and graffiti. The app was hailed by Mayor Sam Adams as a way to “increase communication between Portlanders and the City, ensuring greater transparency, efficiency and accountability in government.”

From a February 9, 2010, press release issued by the Office of Mayor Sam Adams:

“Using their iPhone, citizens can select the type of issue to report, take a photo, geo-locate the issue via GPS or map, add comments, and send their report directly to the appropriate bureau for resolution. Once submitted, citizens will receive updates directly to their iPhone regarding the status of their issue(s).”

The first version of PDX Reporter was downloaded by over 3,000 users in its first month and gained an avid following. It received favorable press and generated calls from government officials in other states hoping to follow Portland’s lead.

But native apps have higher development costs, typically requiring different programming languages and development tools for each operating system, and needing a wide array of emulators for testing. As a result, it became difficult for the City to maintain the native versions of PDX Reporter, respond to changes in the mobile platforms, and keep up with requests for new features by stakeholders and the general public. 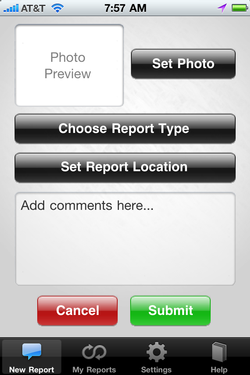 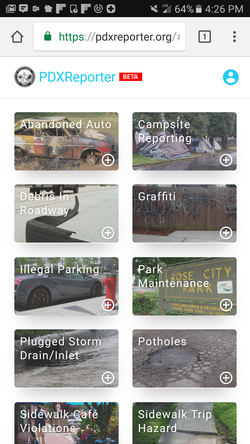 The release of HTML5 in 2014, and the adoption of those standards by the major web browsers, changed the mobile app development landscape. Now it was possible to create dynamic web pages that supported many of the features previously only available to native apps. Even better, since HTML5 support is standard across mobile device platforms (and ostensibly across browsers), developers can create one universal version that is instantly deployed to all users, without having to go through the the review and approval process of the app stores, and without users having to manually download updates. It was in this new world of HTML5 that the new PDX Reporter web app was born.

The beta version of the web app was soft launched to the general public on April 27, 2017, after just a few months of development and testing. It was created by Greg Clapp and Brittany Smart, members of the BTS eGov team, and can be found at: www.pdxreporter.org.

Now that the new web version is live, the iOS and Android apps will be removed from the app stores in the very near future and will be officially retired in October, 2017. However, they will continue to operate until the retirement date for users who still have them installed. Messaging in the native apps currently directs users to the URL of the new web app version.

The objective of the first phase of development was to migrate the existing PDX Reporter functionality to the new platform, with minor improvements in design and usability. It will remain a beta product until the next phase of development, when lessons learned and feedback from users will be incorporated and new features added. Lower development overhead and a universal platform opens many doors for future development of PDX Reporter. Future phases will include the addition of new features and more reporting categories based on City and end user priorities.