A collection of stories highlighted as a part of the Code Change 3.96 Project. 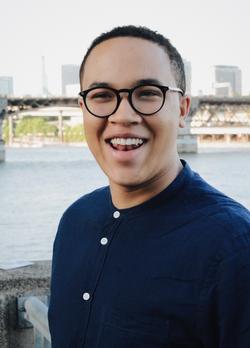 Taji Chesimet has been called to civic engagement and leadership since Taji was in middle school. Taji has been involved as a Committee 3.96 member, bringing the experience of a student at De La Salle North Catholic High School, event coordinator at the CENTER, and a former Multnomah Youth Commissioner. We asked Taji to answer a few questions regarding the code change process and civic engagement.

Which community conversation or gathering did you attend?

I was at the April 30th event and Multnomah Youth Commission community gathering. A lot of the students who participated in these don’t usually get exposure to engage in actual institutional changes. When we are able to participate in these gatherings, we can bring our youth perspective. I also enjoyed the ability to watch, after a year and half of sitting on the commission, the changes in understanding of policy. The platform that was afforded to the Multnomah Youth Commission was one that is something all people should have the opportunity to take part in. The community gatherings were not sought to meet a quota but it rather reflected who have historically engaged with the governments — through civic engagement. I enjoyed this opportunity to share my perspective about how I engage with the city.

What are some of the ways that you have already engaged with Portlanders?

The biggest ways I’ve been engaged is through the Multnomah Youth Commission. I served on the Commission for about a year and a half, and during that time I was given the opportunity to work on a city proclamation for Black History Month with City African-American Network (CAAN) in February. I am currently working on a proclamation about Pride, scheduled for June 12th. Engaging with City Council—through testimony and proclamations—has been a conduit for me for engaging with the City. I also have been afforded the opportunity of participating in galas like the ACLU’s Liberty Dinner, which was a very adult-oriented space. When young people can engage with Portlanders who may not look like them, I hold a newfound respect for the institution that does the outreach (or civic engagement efforts) due to their investment in those communities.

I also work for The CENTER, a youth-centered space and coalition that works with Black United Fund, Latino Network, Urban League of Portland, and more; to allow youth to have space to talk about the issues that matter to them. I’ve been able to work with the community as we engage in interpersonal issues, such as gentrification, race, and white privilege. I have also worked with Black Male Achievement through the Office of Equity and Human Rights as their Program Manager for a summer cohort. I’ve held workshops at Oregon Students of Color Conference, and a few other summits.

I look at the affinities and intersections of my identity and create engagement opportunities that sit at the crossings of those intersections. I also look for opportunities to engage other marginalized communities to engage more often with Portland. I wouldn’t feel comfortable engaging in spaces with people who don’t look like me if I didn’t have those other outlets.

What do you want to make sure we include, that we don’t miss through this process?

I want to make sure that we talk about the lens of equity. The word “equity” is hot, but the actions have often been lost. Code and policies that talk about equity should be reflected in action. We should not be focusing on each identity as a checklist but respecting perspectives whether they are in the room or not.

There needs to be follow through, from conversation to action. Whatever City Council chooses to vote on regarding code change, we need to ask: Do we have a stage of implementation? What does this new code actually look like within in the Office of Community & Civic Life Office?

We need to make sure that there is a staff person handling the program for at least nine more months after City Council has voted. The conversations are so pivotal, and they don’t necessarily deserve to be subverted after the process is complete. Whether it’s through this office or another, there always need to be conversations about what civic engagement is doing, how it’s going, and what can be improved upon. Maybe mirroring the process that the Coalition of Communities of Color does, or maybe something else, but there needs to be some group making sure that we can have this continued conversation. City Council has its own bubble that limits its reach to those who have been harmed. They need to be active in their engagement with other communities and more holistically look at their process that limits it.

What is civic engagement to you?