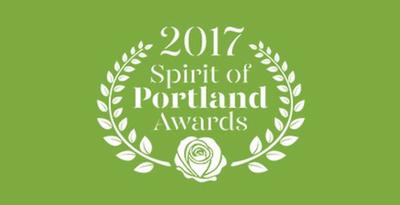 Above: 2017 Spirit of Portland Awards Banner.

The City of Portland’s Mayor and Commissioners invite Portlanders to join them in recognizing and celebrating the 33rd Annual Spirit of Portland Awards winners on Tuesday, November 14th. The award event will be at the Immigrant Community Organization’s community center, 10301 N.E. Glisan Street, from 6 to 8:30 p.m.

The Access and Disability Justice Award will be given to the Cascade Aids Project which works to prevent the spread of HIV, reduce stigma, and provide services to those living with HIV so that they can lead productive lives. While recognizing that HIV can affect anyone, CAP is dedicated to reaching people those hardest hit by the epidemic such as gay and bi men, trans individuals, and communities of color within their unique cultural context. For 32 years, CAP has played a vital role in the health of our community.

About this year’s awards, City Commissioner Chloe Eudaly has noted, “This annual awards ceremony formally recognizes and honors some of Portland’s most active and engaged community members for their outstanding contributions and hard work in the arts & culture, environmental, equity, and social justice issues. This year also we are recognizing those Standing Up for Love against Hate.” More information about the Spirit of Portland Awards is on its website.