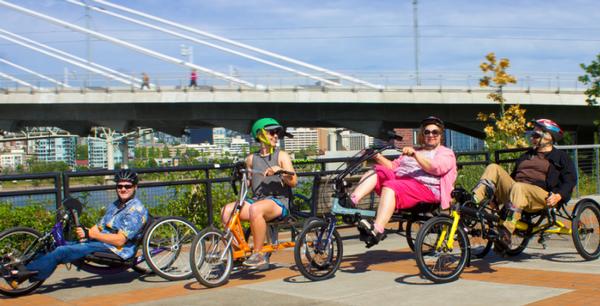 Above: Photo of four adaptive bikeriders on the East Side Esplanade.

Adaptive Bike Rental Program wraps up its first season,
first city-sponsored of its kind in the nation

The innovative adaptive bike rental program, Adaptive BIKETOWN, began in July 2017 and has completed a successful first season, operating for 14 weeks and receiving popular support from its users. It is the first City-sponsored program of its kind in the nation.

An extension of BIKETOWN, Portland’s bike share program, Adaptive BIKETOWN is a bike rental service for people with varying abilities and offers a mix of tandem, hand cycles, and three-wheeled bicycles for rent by the hour with the goal of increasing access to cycling.

Based on the community response and usage, Adaptive BIKETOWN will reopen at Kerr Bikes on May 1, 2018, just in time for National Bike Month. Test-ride bikes will also be available from Adaptive BIKETOWN at all five 2018 Summer Parkway events. The program managers and staff thank everyone who made Adaptive BIKETOWN’s pilot season successful.

Here is Adaptive BIKETOWN's pilot season by the numbers:

The Portland Bureau of Transportation (PBOT) is the steward of the City’s transportation system, and a community partner in shaping a livable city. It plans, builds, manages and maintains an effective and safe transportation system that provides access and mobility. Read more about Adaptive BIKETOWN’s program, including participant’s “firsts.” in PBOT’s blog.

The Adaptive BIKETOWN rental service is operated by Kerr Bikes, which is owned by the non-profit organization Albertina Kerr. Nike provides sponsorship support to increase awareness of the program. Different Spokes is also a program partner.